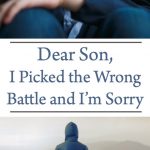 Learning to pick your battles may be your most important tool when trying to have a strong relationship with your teenager.

We argued this morning. I got ugly and my gosh, I hate when that happens.

You came down in a t-shirt and I said to go put on a warmer long sleeve shirt because it was freezing outside. Knowing you only wear a light jacket; you would need that extra layer. You resisted, saying you wanted to wear it and you never wear t-shirts anymore and lots of kids do at school. I told you no, not today. The month had been unseasonably warm, but now it had dropped into the single digits. Of all days to wear a short-sleeve shirt, this was NOT the day. Just NO.

And you argued about how much time it would take to go change shirts and you were going to be late. I told you that you had already wasted more time arguing about it than it would have taken to change the shirt. At this point, my voice was raised and my power switch was turned on and I demanded you go CHANGE THE SHIRT NOW. So, you did.

Hurrying to the car and driving to school, we were definitely going to be late. The tension lingered, I was still irritated, you were still aggravated, we were both sitting in a pool of this morning’s mess and stressed about it all. You very carefully and quietly whispered under your breath that had you not needed to change your shirt, you wouldn’t be late. And BAM, I came back at you- with my power switch back on and my voice raised. You stayed quiet as I preached my momsplanation with all the points I needed you to hear and understand. I forced it on you, giving you no room to respond.

I told you that you needed to work on getting ready for school earlier. That coming down that late would always make us stressed and you tardy. I proclaimed with full confidence that the 30 seconds it took you to run up and switch shirts was not the reason you were late, but rather the thirty minutes before that stupid interaction should have been managed better. I told you that you resisting and our arguing took longer than grabbing the stupid shirt. And then I repeated myself, just to make sure you got it.

I have every right to tell you to change shirts when it’s in the single digits.

I have every right to win this argument and even tell you that you need to manage your mornings better.

That is my job, that is my role in your life. Period.

You knew I would win this battle. You knew that your voice, your opinion, and your feelings had no merit this time around. I was heated and on a roll. I needed you to take responsibility for your mistakes and grow from them, yes.

But honestly, looking back on this morning’s ugliness, I realize I was wrong.

I forgot the most important thing when raising teens. I forgot that you have to pick your battles.

I did a terrible job validating you. I didn’t give you a chance to explain yourself, express yourself, defend yourself. I used my power and my voice to shut you down and you had no option but to listen to me rant while sitting in your captive silence in that car.

This morning was all about me winning the battle. It was about me making sure you did what I said. And to take it all the way to the top of my mom mountain, I made sure to make you feel really bad about it all. I made you sink into feeling like a failure…

Over a stupid shirt.

This was not a battle I needed to choose. It just wasn’t.

I picked the wrong battle to win and I’m sorry.

It doesn’t even matter what shirt you wear. Of course, to me it does, but in the big picture, who cares if your freezing cold for the one minute you walk from the car into school? Who cares if you want to wear your favorite short-sleeved shirt that you haven’t worn in months? Who cares about that? Why did I have to make such a mess of the morning on account of a stupid shirt?

Well, I’m overly anxious and worry about your health and safety and well-being on a ridiculous level. I know. That’s what started it all. I didn’t want you to be cold.

Sometimes going off the rails happens so quickly.

Today started off terribly and it didn’t need to go so wrong.

I should have handled it better. I should not have lost control and gotten so angry.

I always try to listen to you and respect your opinion. I try to make sure you feel validated and heard when you desperately want to speak your truth on much more important things. And although I silenced you on this somewhat trivial issue, it still wasn’t right. I know you felt misunderstood and you had no way of explaining yourself and no way of sharing how stressed it all made you feel.

In this family, you will always have a voice.

And today I failed at that very thing.

You probably felt like it was no big deal to wear a short-sleeve shirt because everyone else does, so why did your mom make such a big deal about it? You probably thought you wouldn’t be that cold since you were only going to be outside for a few seconds, so why does it matter? You were probably super stressed because you knew you were running late and you hate being late to school.

Then you seeped some of your feelings out in the car and paid a heavy price for that. You had to stuff all those feelings of overwhelm and frustration back in because I didn’t allow you to let them out.

And you got out of that car, running into school late, starting your day stressed out, frazzled, frustrated, and hurt. I’m sure you were upset that you didn’t have a chance to really share how you feel about the whole thing and you felt like it all wasn’t fair. You were probably thinking “I hate when she gets so mad and doesn’t understand me. I didn’t even get a chance to explain.” And you were probably also pretty mad that you couldn’t wear that shirt.

And because of this mess, you began your 10-hour day of school and sports practice after, feeling awful, angry, and unheard.

And thinking about all those things you must have been going through makes my heart hurt.

One of the most important things I always try very hard to do is start your days off with stability, security, and peace.

This morning I delivered the opposite.

I’m sorry you had such a terrible start to your day on account of a stupid shirt.

I picked the wrong battle to win and I’m sorry.

I’ll pick the next one with more self-control, wisdom, and maturity.

And when I pick you up after your long day, I’ll tell you all of this and allow you all the time you need to tell me exactly how you feel.

I’ll listen and validate your feelings, so your voice is restored.

And perhaps we’ll discuss you wearing your favorite shirt tomorrow.

This is a contributed post by Christine Carter. She writes at TheMomCafe.com, where she hopes to encourage mothers everywhere through her humor, inspiration, and faith. Her work is published on several various online publications and she is the author of “Help and Hope While You’re Healing: A woman’s guide toward wellness while recovering from injury, surgery, or illness.” and “Follow Jesus: A Christian Teen’s Guide to Navigating the Online World”. Both sold on Amazon.

We love this beautiful book about raising sons from Dr. Meg Meeker. From the moment a mother holds her newborn son, his eyes tell her that she is his world. But often, as he grows up, the boy who needs her simultaneously pushes her away. Calling upon thirty years of experience as a pediatrician, Meg Meeker, MD, a highly sought-after national speaker, assistant professor of clinical medicine, and mother of four, shares the secrets that every mother needs to know in order to strengthen-or rebuild-her relationship with her son.

Raising Teens and Tweens is hard, but maybe we can make it a little bit easier with these other popular posts parents found helpful that also discuss how to pick your battles.

How to Meet Our Teens Where They’re At

How To Have A More Peaceful Relationship With Your Teen; Guaranteed

Give Yourself Grace Mama, You’re Doing The Best That You Can

Previous Post
« It Broke My Heart to See My Son Suffer with Social Anxiety--Here Is How to Help
Next Post
Mamas, We Need To Give Ourselves The Same Grace We Give Our Kids »