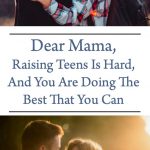 I often wonder as a mom what “doing my best” really means. Because somedays, my supposed best feels like a hot mess.

When my middle son was playing high school basketball, I’d have to pick him up after practice most nights. Even though the schedule said practice ended at 8:00 pm, I’d often sit in my car at the school for an extra 20-30 minutes waiting on him to come out. At first, I didn’t make a big deal. But after several weeks of practices never ending on time, and no communication from the coach, one night I lost my mind.

My poor son got in the car and took the brunt of all my frustration. “If these practices don’t end when they are supposed to, I’m not going to come up here and wait around anymore! This is ridiculous! You’ll just have to text me when you are done and wait on me until I get here. And I don’t want to hear a peep from you about having to stand around until I get here. I have a life you know! Why can’t you at least warn me ahead of time that you’ll be late??”

It’s hard in these moments to feel like we’re doing right by our kids. In our hearts it feels like failure.

None of circumstances that I was railing against were in my son’s control. He had no way of letting me know ahead of time about a practice that he had no idea would run late. It’s not his fault that the coach didn’t seem too interested in the lives and schedules of the parents. My threat to make my son wait on me the next time was a total projection of my frustration toward the coach.

But what made my outburst even worse was that my middle son is a peacemaker. His kind and gentle manner made my hot mess look hotter and messier in comparison.

He didn’t argue back, but kept telling me he was sorry and there was nothing he could do. You would think his remorse would have calmed me down and helped me get ahold of myself. Instead, I continued to fume and rant the whole drive home.

I went to bed that night feeling like the worst mom on the planet, and certainly didn’t feel like I had “done my best” that day.

But over time I’ve come to accept that even at my worst, I truly was doing the best I could. If not, things could have gone further sideways. I could have given into my annoyance and just left, telling my son to find another ride or walk home. I could have stormed into the gym and given the coach a piece of my crazed mind. But these choices could have put my son in danger or humiliated him and both would have seriously damaged our relationship as mother and son.

Even though I acted like a two-year-old, it was the best I had to offer after a long day, and it was a far less damaging scenario in the grand scheme of things.

Think about it. When 8 o’clock rolls around, we are tired, mommas. Right? After a long day of who knows what between work, caregiving, and doing all the things, we just want to be in our pjs and call it a night.

So, I was frustrated at this coach intruding on my plans and keeping me from my PJ’s. Well, at least that’s how I rationalized it at the time.

The next day I apologized to my son for my meltdown, which he promptly accepted. What I didn’t do however, was give myself the same grace. I remember the negative self-talk yammering in my head for quite a while after the incident. Not to mention after many other less-than situations.

Mom guilt is a thief, always robbing us of joy and self-worth—and we are complicit in the thievery!

Mommas, we need to believe that if we are loving our kids, we are doing our best. Our actions and behaviors won’t be perfect. But underneath the imperfection is radical love. This is what matters, and this is what hopefully sticks for the long haul.

This was a contributed post from Shelby Spear. Shelby is a sappy soul whisperer, sarcasm aficionado, pro-LOVE Jesus adoring mom of 3 Millennials writing stuff & doing life w/ hubs of 25 yrs. She is the co-author of the book, How Are You Feeling, Momma? (You don’t need to say, “I’m fine.”) You can read her open heart about the revelations, screw-ups, gaffes, and joys of motherhood on her blog shelbyspear.com, around the web, and in print at Guideposts.

Raising Teens is HARD and we know it. Maybe these posts other parents found helpful can make it a little bit easier.

Why And How To Stop Taking Your Teen’s Attitude Personally

« Why Your Teen Feels Like All You Do Is Criticize Them And How To Fix It
Moms of Teens, Sometimes All You Can Do Is The Next Right Thing »