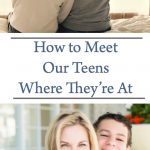 This need is often the most significant missing piece between us as parents and our teens. Both connection in the way we communicate (or don’t) and how we relate to their world, be it their emotions or interests.

Our teens often feel like we are ancient, clueless, and uncool, among other less-than-desirable traits. We often feel like they are disrespectful, ungrateful, and impossible to reason with.

Neither scenario is really true all the way through. Much of what we perceive is a projection in both directions, fueled by fear and uncertainty—not to mention frayed nerves and emotional overload.

The thing is, our teens crave connection.

They need to feel seen, heard, and understood.

Mostly they want these affirmations from their peers because, to them, only their peers could “get them.” How could we, their oldish, authoritative, annoying parents, ever meet them where they’re at?

And there is some truth to their line of reason.

It’s difficult to meet them where they’re at when they shut us out and communicate more with eye roles and exasperation. It’s also difficult because we haven’t lived through the pressures, temptations, and emotional whirlwinds that make up their current cultural landscape.

Sometimes the only way to wiggle our way into our teen’s world is by connecting with them in unique ways.

We have to remain open to their interests and passions, no matter what

My husband and I did this by being very intentional in learning something about our teen’s passions.

My oldest son loves to cook. So when he was a teen, we began cooking together a few times a month. I always let him pick the recipe even if the food wasn’t something I particularly enjoyed. I’d let my son call the shots and make any creative changes to the recipe by adding ingredients or leaving some out. Doing so gave him full control over something, allowed him to explore, and gave me a chance to learn “from him.” Since he always felt like I was trying to control, teach, and be the boss, the opportunity for him to be in charge helped soften the edges.

My oldest son also went through an EMO (emotional) phase at 13 and began dressing in dark clothing and hooded sweatshirts. He straightened his hair, wore long bangs to cover his face, and listened to dark, depressing music. This season was a gut-wrenching and scary time for all of us. We did undergo family counseling, but my husband also met our son where he was at.

One day he took him to get a haircut, and my husband had our stylist straighten his hair and style his bangs down over his face just like my sons (he happened to have hair long enough to do that). I still cherish the picture we took.

My husband also took our son to see his favorite EMO bands in concert. Did he like the music? Not a chance. Did he appreciate the depressing lyrics? Nope. They scared both of us.

But we learned the lyrics and affirmed our son’s passion for this music—all while praying ourselves raw that we would make it through this dark time.

We asked our son to tell us why he liked the lyrics so we could discuss their deeper meaning. When we felt some of the lyrics were harmful and dangerous to listen to, instead of banning the music altogether, we teamed up with a dear friend of ours and did research to find bands that were a similar genre as the screamo and heavy-metal music he liked. This way, my son could listen to the sounds that appealed to him but not be influenced by unhealthy messages.

Connecting is a two-way process that parents must lead

These are just two examples of how we tried to meet our kids in their teen worlds. The opportunities are endless. We can learn how to play their favorite video game and then take them on—even if we can’t stand the premise or think it’s a waste of time.

We can read a book with them and discuss it—letting them pick the book even if it’s something we don’t care to read. We could learn an instrument together or take up a hobby that our teen has expressed interest in trying.

Regardless of what we do, just the act of leaning in and being willing to learn about or participate in something important to them is often disarming enough for us to break through and connect. Anything that puts our teens in the driver’s seat as a means of helping us find common ground is worth a try.

Even if your teen says no to your suggestions, don’t give up. Keep pursuing new ideas until you find something that gets their attention.

Our teens need us in more ways than they will ever admit. Connecting with them beyond the typical parent-child relationship allows them to get their fix without even having to ask for our love and involvement. 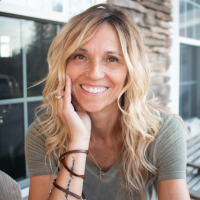 Shelby is an empowerment coach, author, speaker, & freelance writer. Her writings are featured in Guideposts, all over the internet, and on her blog at shelbyspear.com. The book she co-authored with Lisa Leshaw, How Are You Feeling, Momma? (You don’t need to say, “I’m fine.”) was a 2020 Publisher’s Weekly Booklife Award Inspirational/Spiritual category winner and grand prize finalist.