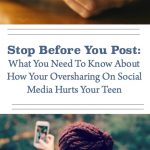 Sharenting (or oversharenting)- noun- When parents overshare photos and other data of their children on social media.

This is a contributed piece by Rachel Steinman

Sharenting is the overuse of social media by parents sharing content about their children, such as baby pictures or details of their children’s activities. It’s related to the concept of TMI, or “Too Much Information.” Pediatricians are starting to consider how sharenting affects childhood well-being and family life.

I have a podcast called Dear Family, and it’s all about our complicated and wonderful families, parenting, and finding mental wellness. I also have a beautiful family, specifically two stunning, talented, and bright teenage daughters I am immensely proud of. (Yes, I know I sound like a biased mother, which of course I am.) If I could, I’d share images of their activities and their accomplishments left and right on all my social media platforms because it feels like a mother’s prerogative. If you were able to look at my private Facebook and Instagram accounts, you would see that it is exactly what I used to do…but not anymore.

I’ve been warned by my daughters to no longer post any pictures of them on social media without their permission, and the orders are strict.

Sharenting is a new phenomenon, where parents, particularly mothers, feel driven to share their children’s images and life stories on the internet. Some parents use posts of their children as a means of upward social comparison, where they want other people to envy them. When parents do this, they’re not thinking about their child’s well-being but rather, they’re focused on their status. I will admit to being one of those mothers at times, something I’m not proud of because it feels like I’m bragging to find validation.

When my daughters ask why I feel the need to document our experiences online, I’ve said things like, “So I can look back over time and enjoy it again.” Or I’ve said, “One of my favorite things about Facebook is getting memories from up to 11 years ago, reminding me of how little and adorable you were and of the fun times we had together.” They shake their heads, knowing I can just look back at the pictures on my phone or laptop.

What I have to remember is my daughters (and your kids) are the first generation to inherit a social media presence they never asked for and it comes with privacy concerns.

In 2002, when my first daughter, Amber was born, Facebook and smartphones that took photos weren’t in existence. I made good old fashioned physical photo albums by transferring her baby photos from a digital camera onto my desktop computer. It seemed like a huge jump in technology from when I used to drop the film off at a Kodak development kiosk and have to drive back days later to pick it up, hoping out of the 36 photos I took some would be worthy. But with a digital camera, I could upload the images of Amber to a site like Snapfish or Shutterfly and order them to be delivered by mail. Because I was a proud new mommy and wanted my close friends and family to witness her cuteness and what we as a new family was up to, I’d send them a link to the album. I loved hearing the feedback and being able to ask Amber’s grandparents which copies they wanted.

In 2008, when my daughters were six and three years old, Facebook was introduced into my life. I stopped making physical photo albums and started making digital ones stored in the cloud. And I was far from alone. Our social media feeds continue to be jam-packed with cute, quirky, and sometimes embarrassing photos and videos of children posted by their parents, likely without their permission.

Pediatricians and researchers are now asking if sharenting is a problem for our children as our digital footprints spread wider and seemingly last forever. Screenshots and internet archive sites can continue the life of any social post long after an account has been deleted. This means fleeting childhood moments, some potentially embarrassing or harmful, become a permanent record. We were all awkward teens at some point, so imagine how you’d feel if your mom shared an image of you far and wide when you had pimples, a funny hairstyle, and braces, and you knew it was permanent?

Now here’s the irony. Whereas Baby Boomers and Gen-X’ers believe their privacy is paramount, Millenials and Gen-Z’ers view their privacy differently. For example, the younger generations might be fine being public on their Venmo account to let anyone know who and what they are paying for. And yet, understandably they want and deserve to be asked before a parent shares a picture of them in a bathing suit on a family vacation. When I see little kids posing for multiple pictures, I can’t help but wonder if the parent behind the camera is overly focused on her social media feed rather than being in the moment and being present. We as parents are culpable.

According to Barclay’s, by 2030, sharenting could account for 7 million incidents of identity theft that would result in 800 million dollars in online fraud.

About a year ago, after spending hours going through hundreds of professional digital photos taken at a momentous family celebration, I wanted to create an online album to share with my Dear Family and Friends on Facebook and Instagram. After the album had been up for about half a day and had gotten a substantial amount of likes and comments, my oldest daughter logged onto Instagram and saw an image of herself she didn’t approve of. She asked me to take it down, explaining how I should have asked her first and how I needed to respect her wishes and her privacy. I tried to reason with her, saying how beautiful she looked, but she stood her ground.

While I was the one who often cautioned my daughters about their safety, there Amber was, acting as the adult and cautioning me. Amber schooled me on the risks I was unwittingly exposing her by bringing up facial recognition tracking and down the road college admissions and job prospects.

I felt like such a hypocrite because I had warned her about what she shared publicly, especially with Snapchat’s geo-location, fearing creepy old men might follow her accounts. We had discussed the idea of consent in the past, and how she had a voice that mattered and was in control of her own body and her own decisions. And yet I hadn’t shown her the decency of asking her consent? And what about the risks of pedophilia, data broker profiling, hacking, and other threats to her privacy and security I overlooked?

There is a phenomenon called “digital kidnapping” and its when images of babies, children, teens, and even adults are used without anyone’s permission for advertising or fake social media profiles. It’s most disturbing when used on pedophile image-sharing sites.

Now that I’ve put the fear in you all, let’s not forget social media does have its benefits and can be an incredible tool to keep us connected. Without Facebook and Instagram, how else would I see what my East Coast cousins and their kids are doing or learn about a fun goat walk in the mountains I want to join? How else would I spread the message of finding mental wellness through my writing and podcasting to a wider audience?

If we remember to model good posting behaviors by being thoughtful and cautious about what we post, taking into consideration what our kids are wearing in images and checking the privacy settings, our kids will learn the same habits. Good modeling behavior leads to good habits that could later protect our kids, teenagers, and young adults from making poor decisions about sharing nude images or explicit material. But it’s a conversation and one we need to continually have.

By asking our kids (or spouses, friends, colleagues, etc.) for permission, we are modeling good social media etiquette and teaching:

I will continue to be proud of my daughters and want to share their great accomplishments with the world. I just will ask permission first.

This post originally appeared on Medium and shared with permission from Rachel Steinman. Rachel is the host of the podcast, “Dear Family.” It’s about our complicated and wonderful families, parenting, and finding mental wellness.

Parenting Teens and Tweens is HARD! Here are some posts other parents have found to make it a little easier:

Teens Have No Safe Spaces Anymore Thanks To Technology

« I Know It’s Hard Now, But Your Teens Will Come Back To You
Why Your Teen Feels Like All You Do Is Criticize Them And How To Fix It »