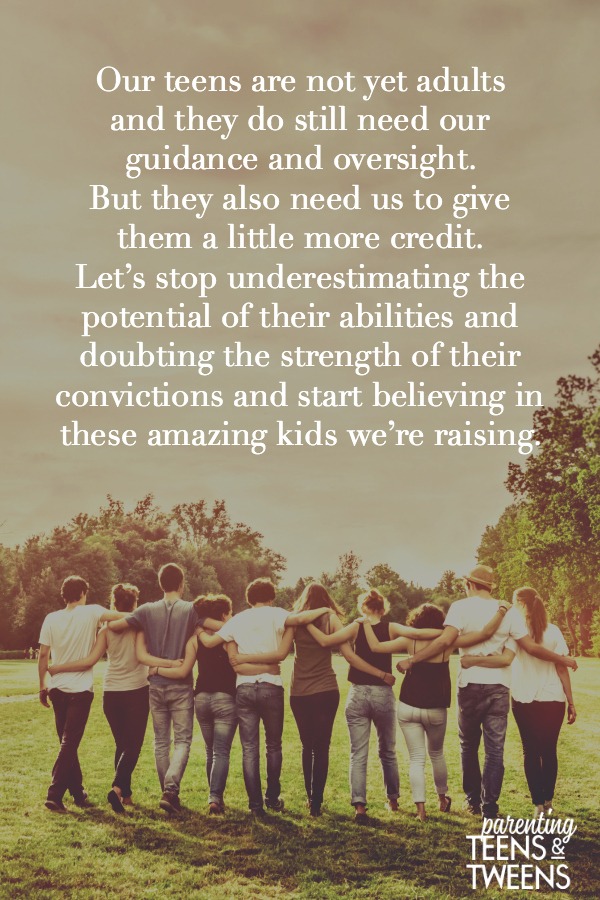 Whether you have teenagers, or you have younger children who will someday be teenagers, as parents we really need to be thinking about why teens get such a bad rep.

All the nasty things that many people say about teenagers are incredibly disheartening, but also amazingly cliché.

If you think that this is the first group of adolescents whose elders have looked down on them and proclaimed them entitled, lazy and whiny – you’d be wrong. This has been a pattern for hundreds of years.

For generation after generation, teens have been criticized for everything from how they dress and the music they like to boundaries they push and the causes they champion.

Isn’t it time we finally let go of the some of the tired teen stereotypes that we recycle over and over again?

Teenagers have always been caught in a strange middle place in our society.  Depending on what we as adults want or expect of them, we seem to be constantly oscillating back and forth between telling them to act and be more responsible like adults and then simultaneously treating them like children.

The reality is that teens lie somewhere in between. While they can absolutely be impulsive, disrespectful and self-involved, it doesn’t mean that they can’t be equally compassionate, driven and informed. This is part of what makes them so infuriating, but it is also why they can be such powerful force.

History has proven that teenagers can play a significant role in accelerating and helping to bring about positive social change in our country and even our world.

Teens in this country were crucial in helping to end segregation and to passing both the Civil Rights Amendment and the 26th Amendment. In other countries, teens were at the heart of helping to end Apartheid, toppling the communist government of Czechoslovakia and in lessening the grip of many oppressive regimes in the Middle East.

And there is probably no better example of the kind of change even one teenager can affect than that of Malala Yousafzai. She has singlehandedly made huge inroads for women’s rights internationally and at only 17 was the youngest person to ever be awarded a Nobel Peace Prize.

These are dramatic examples, but everyday, there are teenagers making huge contributions to our society in far less high profile ways.  Teenagers volunteer hundreds of hours each year in their communities doing everything from serving meals to the homeless to building homes for Habitat for Humanity.

And as questionable as teenage decision-making can sometimes be, the current generation of teens seems to be making better ones than their parents did at the same age.  Rates of cigarette smoking, alcohol consumption, teenage sex and teenage pregnancy are down dramatically among today’s teens when compared to teens of the 90’s.

No, our teens are not yet adults and they do still need our guidance and oversight. But they also need us to give them a little more credit.  Let’s stop underestimating the potential of their abilities and doubting the strength of their convictions and start believing in these amazing kids we’re raising.

None of us really know for sure what they can or will achieve, but they deserve more than the low expectations set by a false teenage narrative. It’s time to finally close the last chapter on that book and let our young people write their own stories.

Raising Teens and Tweens can be hard work, here are some other posts to help make it a little easier:

When Raising Teens, Sometimes You Have To Screw The Rules