I will never forget the unsettled feeling that began to course through my body as I attended high school orientation night with my oldest child.

Sure, it was hard to grasp the reality that he had reached this milestone already. However, that gut check was overshadowed by the pressure I felt from other parents as I stood in the line to sign up for summer school, zero hour (an optional enrichment class offered to students before the official start of the school day), and AP classes. The crowd was thick, and the only reason we were in line was to hand in a petition for one honors class.

As I watched parents around me write out checks for additional courses, I began feeling anxious about choosing the right path for my son.

Am I preventing him from academic success by not registering him for more classes during his summer?

If I don’t, will he get accepted into the college he desires?

After vocalizing my concerns to the teacher behind the table, she calmly assured me that my son would be just fine without all the “extras.”

That night was my initiation into the loud and often confusing territory of young adulthood paths.

It is hard not to get sucked into the college admissions hype.

My husband and I have three young adult children. Each of them possesses unique personalities and skill sets.

In addition, they have different educational backgrounds. My sons graduated from two of our district high schools. My daughter was home-schooled through an accredited program from sixth grade through high school graduation.

The one thing they all have in common is the decision to attend college; but it makes sense that they each pursued a different path in their post-high school careers. The educational journeys we explored with our kids included trade school, community college, and a traditional four-year university.

When our oldest was trying to decide what he would do after high school, he chose our local community college with a goal to transfer to a four-year college after two years.

Cost was a factor, and he liked that we could pay for his tuition and room and board, which eliminated the need for him to take out student loans during that time. He also was unsure of what he wanted to pursue as a major.

Community colleges often have a stigma that they are not as rigorous as traditional four-year universities, but that isn’t true. Community college students often take the same general coursework as four-year college underclassmen, are taught by qualified instructors, and often have smaller class sizes.

After completing his Associate’s degree, we explored transferring options. The factors we considered were cost, major, and school size.

He landed at a smaller liberal arts college that was a good fit for his academic interests and financial requirements. The tuition is offset through school/community partnership scholarships, job income, and loans. (Of note: This particular school has a specific partnership with a local coffee chain that offers a significant reduction in tuition to students who work there. While my son did not pursue this option, asking about private partnerships or work-study programs is a great question on college tours or to admissions counselors.)

Additionally, my son was lucky to have relatives near campus, so housing was not necessary. While he did live on campus for one year to get the experience, he did not feel the cost was worth it.

He will graduate next spring after navigating his education at his own pace.

Learning a trade is a great way to get immediate employment

There has never been a better and more important time for students to consider vocational education. Between rising costs, lack of skilled labor, and an aging workforce, community colleges, technical colleges, and trade schools all prepare students for meaningful careers with decent wages. They also offer more flexibility in class schedules so students can work, apprentice, or take care of their families while still earning a degree.

In the case of our daughter, she decided to pursue an associate’s degree in culinary arts after attending a learning day at our local community college.

While earning her degree took four years, this was because she worked part-time at a local fast food chain that offered a significant amount of tuition reimbursement. Because she chose this less expensive educational path, my husband and I paid for the remainder of her tuition.

A great bonus of trade schools is the teachers typically have years of professional experience and are passionate about sharing their skills and mentoring. The students get more time with the staff and become more part of a community for networking and professional development.

These programs are often more concentrated than four-year Bachelor’s of Arts degrees, and the general education classes are more specific to their career (accounting, business writing, communication, etc.)

She came out of the program highly employable with a specific skill set, and quickly found a job in the restaurant industry. Her professors contributed to her passion for her path, and she still leans on them for references and career resources.

Aim for right-fit when looking for a four-year college

While my two older kids took a less traditional route post-high school, it made sense for my youngest to pursue a traditional four-year college.

Our youngest child began the college search during his junior year of high school while the COVID pandemic peaked. Given his confidence in his career choice, personality, and academic achievements, we decided to pursue a four-year school with on-campus housing options. Due to the factors of the pandemic, it was nearly impossible to attend an in-person visit.; however, we took advantage of online visits led by college admissions staff.

After sitting down with our son, we identified size, cost, and a diverse student population as important features for a good school fit. It’s tempting to focus on schools with a public reputation for certain majors or rank well on a list, but it’s also important to remember the end game.

For example, we honed in on schools known to be strong in mechanical engineering, but we were not finding schools that were a good fit for our son. We asked ourselves, Are there other important skills to gain along with those directly related to career choice? What could he get out of a school beyond a degree?

A postcard arrived in the mail, which pointed to a university we had never considered for his engineering focus. It met all of our identified features.

A zoom meeting with a college admissions counselor and visit affirmed he found the right school for him. The class sizes are small, there are plenty of activities and events occurring on campus, and opportunities to build relationships with students from various backgrounds. Thankfully, his test scores resulted in full credit for some of his required classes. In addition, the university offered him a substantial four-year scholarship based on his G.P.A.  He just entered his sophomore year after an enjoyable and transforming freshman one.

There is no one-size-fits-all when it comes to college, just like there is not only one path to living life.

There is no one standard for life decisions, so naturally, that applies to next steps after high school. For parents and young adults, listening to the voice within can be hard to hear amid so many other outside voices shouting expectations.

However, flourishing does not have a timeline or assumed path. Embracing that reality liberates us to find the best way forward.

Are you looking for resources and perspectives regarding changing the college conversation with your teen? Join our Facebook group here. 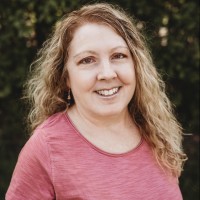 Stephanie is an ordained pastor, speaker, writer, and mental health advocate. Her pieces have appeared on multiple online sites and she is also a writer for the Redbud Guild. Stephanie lives in the suburbs of Chicago with her husband and are parents of three young adults. She blogs at http://stephaniejthompson.com/ and can be followed on Twitter @s2thomp and facebook.