Inside this post: In today’s tech-centric world, students are feeling overwhelming anxiety when they need to speak face-to-face to adults and other authority figures. Teaching our teens how to self-advocate is an important life skill.

Teach Your Teen to Self Advocate

For years, I’ve been teaching my sons to advocate for themselves. First, we’d strategize together to find ways to make their woes better (if and when we decided the issue/drama was worth the trouble.)

We also spent a lot of time talking about how to best approach authority figures (privately and respectfully).

And finally, I made sure my sons knew when and how to ask for backup.

In simple terms, self-advocacy is the ability to communicate what your needs are.

I couldn’t have known it when they were younger, but those lessons are still paying off years later. And the more my teens practice these strategies, the better they are advocating for themselves. For example, while it may have been awkward and uncomfortable in elementary school to request a private conversation with their teachers, by high school it’s become second nature.

It really hit me last night.

My son was stressed because he arrived late to English class. Scratch that, he arrives late every single time he has English class because he’s coming from an off-site machining class.

But during the few minutes he missed on that particular day, his teacher announced a big project, and students immediately paired up with a classmate. By the time my son arrived, there was no one to partner with for the assignment. As the odd one out, he was left to do the project alone.

After thinking about it for a day or two and reviewing the full breadth of the project work he’d have to manage solo, he put together his reasons for wanting and needing a partner. Then he spoke to his teacher after class and made his case for joining another team, even if it was the only group of three.

He enjoyed a bit of relief, and his new teammates were thrilled to have someone who happily volunteered for all the public speaking and presenting.

Do you know the best part? I didn’t know anything about the situation until after it was over and handled.

But then, just after he shared this story, he took a breath and said something that stopped me in my tracks.

He said it without anger or embarrassment or hesitation. It took me a moment, but I realized my son was advocating for himself to me. His number-one cheerleader.

He stated his needs and asked for backup. Just like I’d taught him so long ago.

So we made a plan, led by the just-turned-16-year-old who’s gotten so good at advocating for himself.

He visited his school counseling office during a free period the next day and acquired copies of his records from some previous testing. I messaged his doctor online, and then we came together with our findings.

We haven’t decided if he wants or needs additional testing or meds. He’s had mixed experiences in the past. But I’m sure we’ll talk through it and weigh the options, and I feel confident that he’ll advocate for what he needs.

What I didn’t realize years ago, when I started teaching my sons to advocate for themselves, was how nice it would be to have another body in our corner. Another advocate who’s vocally standing up for my child and their best interests. Someone to discuss the pros and cons, and thoughtfully help prioritize and strategize.

One who’s 100 percent invested in a positive outcome.

And that’s my child himself, taking over my previous role as his own number-one advocate.

How to Teach Your Teen How to Self-Advocate

While I started, teaching my sons to advocate for themselves when they were little, it’s never too late to start.

Here are some key points to focus on when improving self-advocacy.

We spend a lot of time talking about how to best approach authority figures. Usually, it’s best done privately, which could mean hanging around after class, going to office hours, or sending a text or email. And in written messages, begin with “Dear Ms.” or “Hi Mr.” and skip the emojis–you’re not texting your buddy.

It was hard at first, especially for my shy kid; but the more they practiced, the easier it got. By now, it’s become second nature for them to respectfully start conversations with their teachers, coaches, counselors, deans, and even the boss at work.

Know your rights in order to self-advocate effectively.

One of my sons has an Individualized Education Plan (IEP) Since fifth grade, he’s been attending his IEP meetings, and sharing his input on what accommodations work (or don’t work) for him. He knows he’s allowed extra time. He also knows he can refuse accommodations and advocated not to be taken out separately for certain testing.

By understanding his rights, he’s become more invested, more willing to speak up, and he’s even advocated for others.

Question out of curiosity, not for a better grade.

When you don’t understand or agree with something, resist the impulse to go to your teacher/coach, etc. in anger. And don’t whine, either. Instead, shift to a tone of curiosity and involvement.

I tell my kids a story about when I was in college. I got a B- on a history paper that I thought was pretty darn good. My TA gave no comments or explanation for the grade, so after class, I simply asked, “How could I have made this better, so I know for next time?”

When you respectfully ask your teacher to clarify a grade, you’re showing that you care, you’re invested in the class, and you want to do better.

And in my case, my TA reviewed the paper and did end up giving me a better grade (though you shouldn’t go in expecting that).

As I talked about above, when my son missed out because of something outside of his control, he could have just accepted it. Instead, he thought about it and then put together some logical reasoning and solutions that worked out better for all involved.

The goal is to help your child not be reactionary, and instead rationally discuss how a situation can be improved.

This may feel awkward at first, but practice does make perfect. It’s great to have your teen pretend to have a difficult conversation with you first, before having it with the teacher/coach, etc., particularly if they are feeling emotional. Also provide your child with some phrases that can get them through if they feel flustered such as, “I’m not sure if I’m understanding this right. Is it okay if I come back in the morning to discuss?” or “I appreciate your time, can we set up an appointment so I can talk to you about this.”

We always underscored that our children had the right to speak up for themselves and get the resources they needed to be successful. Needing help or clarification isn’t anything to be embarrassed about and it isn’t being pushy or overstepping your bounds.

Teaching my kids the necessary self-advocacy tools has been priceless during their teenage years. Not only has it made the high school experience a little smoother, but it’s great to watch your student stand up for their best interests.

Because there’s nobody better at knowing what he needs than my son, and it’s great to see him as his own number-one advocate.

Raising teens is hard, but you don’t have to do it alone. Here are some other good articles you may enjoy:

Forty of the Most Inspiring, Heartfelt Quotes About Raising Teens 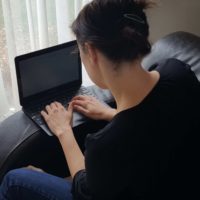