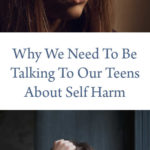 While watching a family movie recently, I noticed my daughter was unusually distracted by her cell phone. She seemed to be getting increasingly agitated, so I asked her about it. My daughter explained that she and some friends had seen signs that a schoolmate was cutting. Since then, somebody had reported concern to a guidance counselor and the student’s parents were called. My daughter’s friends were now engaged in accusing each other of “snitching.” She was really upset and confused about what to do.

As a clinical psychologist, a large part of my professional life is devoted to helping people with self-injury behaviors such as cutting. As a mom, my concern shifted to how to help my daughter and her friends cope with exposure to friends’ struggles with self-injury.

We have been warned to talk to our kids about sex and drugs and how they can behave when confronted with friends engaging in these behaviors. Are we talking to them enough about what to do when a friend’s self-injury behavior is revealed? I don’t think we are.

Self Harm Among Teens Is More Common Than We Realize

In my experience many parents don’t talk about it because they assume it won’t affect their own teens. The reality is that 1 in 4 teenage girls and 1 in 10 teenage boys are engaging in some form of self-injury. It is actually unlikely that our teens won’t encounter this behavior.

Perhaps more than not recognizing the need for the conversation, I think we don’t know what to say. I know I was caught off guard! Because of that, I later gave a lot of thought to what messages I wanted to be sure to convey to my daughter.

I wanted her to have some understanding of the behavior. Far too often it is dismissed as “attention seeking.” The reality is most people who self-injure go to great lengths to hide it. Furthermore, on the occasion that self-injury is how someone is seeking attention, we are better off wondering why this is the method of communication they felt driven to. Ignoring it can, at a minimum, communicate to a friend that no one cares about their pain. Worse yet, it leaves a friend at risk for serious injury both intentionally, and unintentionally.

I wanted her to understand that self-Injury is a sign that someone is experiencing emotional pain beyond their skills to effectively handle it. Some engage in self-injury as a method to relieve and release intense emotions. Others are attempting to stop feeling emotionally numb or dissociated.  Understanding these basic principles of self-injury can help teens show compassion rather than judgment.

Our Teens Need To Know Self Injury Needs Intervention

While some understanding is helpful, I think it equally helpful for my daughter and her friends to realize that a full understanding of the behavior needs to be left to a mental health professional who is experienced in working with self-injury. For that reason, I was concerned with the idea that seeking help was perceived as snitching. We discussed there being a big difference between trying to get someone in trouble and trying to engage the help of an adult in a dangerous situation.

I want my daughter and other tweens and teens to recognize their growing ability to take on the world and support each other as they do. Yet, regardless of our age, we need to be able to recognize when a situation is beyond our ability to handle it effectively. If a person of any age encounters a friend doubled over in physical pain, their almost unanimous choice would be to seek help. It would certainly not be considered “snitching.” Anyone would recognize the greater need to get help from someone equipped to understand the problem.

I wanted my daughter and other teenagers to know they need to treat a friend’s self-injury in a similar manner by supporting them in getting mental health help. They can encourage or support their friend in telling a parent. If that doesn’t feel doable, help can be found from a school guidance counselor. In addition, the teen playing the supporting role should feel comfortable sharing any anxiety about their friend with a parent, or guidance counselor.

As both a mom and a psychologist, these are the messages I wanted to pass along to my daughter. I know that when I am caught off guard, I don’t have my best conversations. That’s why I thought it was important enough to have another conversation after I had time to process my thoughts more. I am hopeful that she now feels able to handle this situation and those that may come after. I am also hopeful that I can help other parents prepare for this likely conversation.

This is a contributed post by Alisa Crossfield. She is currently enjoying the roller-coaster ride of parenting a teenage son and teenage daughter. She is also a Clinical Psychologist practicing in Westport Connecticut. Her private practice focuses on adolescents and young adults with emotion dysregulation as well as parent consultation. Her professional and personal roles serve to inform each other. She shares these experiences in a personal blog entitled “Psychdiary” and a Psychology Today blog entitled “Emotionally Healthy Teens.“

Parenting Teens and Tweens is hard, but these popular posts other parents found helpful might make it a little easier.

How To Help Your Teen Survive All The Drama (And You Too!)

Is it more than just normal teen anxiety; when to seek medical advice

Signs Of Teenage Depression And How To Help

Previous Post
« Before She Goes, I'm So Thankful I Had My Teen To Myself
Next Post
How An Unexpected High School Class Brought My Teenage Son and I Closer »