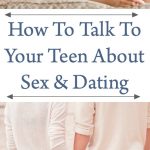 Inside:You know you have to do it, but exactly how do you talk to your teen about sex and dating. Here’s 24 ways to get the conversation started

It’s a sensitive subject; we seldom talk much about sexuality even with our adult friends, let alone with our cringing, eye-rolling teenagers. But there are ways you can open the door about sex without making your kid run screaming from the room.

Choosing When To Talk To Your Teen Is Key

To have a decent conversation about any sensitive topic with teens, including sexuality, always pay attention to the emotional context and the setting. Here are some basic guidelines:

Take deep breaths if necessary to ground yourself before plunging in. You don’t have to be perfectly calm, but do your best to release or contain any anxiety you feel.

Learning any complex topic is easier in small chunks over time. Many brief conversations are more effective—and less overwhelming—than one long one.

Feeling there’s no escape amps up kids’ anxiety. Talk in the kitchen so they can leave the room if they need to. If you talk in the car, be sure it’s a short drive on the way home (never on the way to school, practice, etc.).

Don’t do it when you’re mad or stressed.

If you talk about sexuality when you’re upset, your kid’ll be anxious and defensive rather than receptive. The whole thing becomes a big negative, which means they’ll be less interested in talking with you in the future.

Don’t do it when your kid is stressed.

If your child has an exam tomorrow or just had a fight with their best friend, they’ll be too caught up in their emotions to listen to what you want to say.

How to Talk To Your Teen About Sex and Dating

24 Ways To Get The Conversation Started

Sometimes, you want to make sure your kid knows something important about sex. If you ask whether they know, they’ll say they do…whether or not that’s true. Let your kid save face by opening with a disclaimer.

“You probably already know this, but I want to make sure….”

“I just learned something from an article I read….”

“When I was your age, I was confused about ____. I want to talk to you about it to make sure you’re not confused, too, just in case.”

To (Maybe) Start a Conversation

Having a dialogue about sex and dating can be challenging. You may be dying to know what your teen is thinking (or doing), but you can’t force it. The fastest way to end a conversation is making it feel like an interrogation.

So choose times when your kid is relaxed and possibly receptive. Stick to ideas and generalities rather than specifics about their personal life. Tap into their knowledge and perspective rather than trying to convey yours. Try telling stories about what was hard or confusing for you; that normalizes the struggles of adolescence and makes you more approachable. Even if your efforts fall flat, your child notices you’ve tried and may be more willing to talk another time.

“Things are so different from when I was in high school. What’s important for me to know about being a teenager today?”

“When I went through puberty, it was awful/weird/confusing/____. I remember feeling _____. I struggled with ____.” (Odds are good your kid will jump in with questions.)

“What do girls convey when they dress in a really sexy way? Do people think more of them, or less? What are the advantages and disadvantages of making sexiness the most obvious thing about yourself?”

“What kinds of pressures are kids at your school feeling about sex? Do some kids feel like they ‘should’ have sex even if they’re not ready?”

“Do people use terms like ‘slut’? What does it mean to be called that? What do you think about that? Is there a comparable term for guys?”

“If a guy has sex, what do people think of him? What if a girl does? Why do you think it’s different for girls? Do you think that’s fair?”

“What do you think about how those two characters in the movie handled sex? Is that a good way to do it? What could they have done differently?”

“I heard that (student at your child’s school) got in some trouble. What are kids saying about her (him)? Do you think she (he) is being treated fairly?”

To Get Them Thinking

Sometimes, your goal is just to get your teen thinking, even if they don’t share their thoughts with you. Make statements or ask thought-provoking questions without expecting a response—but trust that you’ll get their brain going.

“I wonder how expectations of guys and girls influence their choices.”

“What’s the difference between asking someone to do something sexually and pressuring them?”

“I think sex is better with a partner you trust.”

“How drunk can someone be and still be able to consent to sex?”

“Do sexual partners have an obligation to be honest with each other, like about whether they’re in a relationship or have an STI?”

“How do people treat each other in healthy relationships? What behaviors would be wrong or even abusive?”

“How does a person know when they’re really ready to have sex?”

“What do you want your first time to be like? Is it important to you to trust the person? To be in a relationship? To be in love?”

To My Teenage Daughters Before You Start Dating

Jill Whitney, LMFT, is the mom of two twenty-somethings and a licensed marriage and family therapist in Connecticut. In addition to her clinical work, she conducts workshops on talking about sexuality, writes at KeepTheTalkGoing.com, and has been quoted in dozens of articles on relationships and sexuality. She’s passionate about improving communication about sexuality, especially between parents and kids.

Any more ideas for How To Talk To Your Teen About Sex and Dating?

Previous Post
« Teen Anxiety - 5 Ways To Help Your Teen Cope
Next Post
Is My Teen Daughter A Lesbian—Or Is It Just A Phase? »