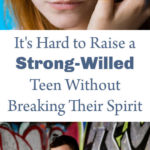 The story goes that when I was 9, my mother brought me to the pediatrician’s for a check-up and I asked all sorts of questions to him. While the nurse took me to another room to give me a shot, the doctor told my mom, “That one right there, she’s high spirited.”

My mom sighed. “She’s going to be the death of me.”

The doctor, who also happened to be a father of five, replied: “Yep. You’re going to have to work hard to keep her safe without breaking her spirit. She will be a handful.”

I almost broke my daughter’s spirit

I am not sure when the relationship with my teen daughter went off the rails.

Perhaps it was at age nine when she decided she didn’t want to pick up after herself and no punishment impacted her behavior.

Maybe it was age 11 when she started telling half-truths to get out of conversations with her father and me and started bossing everyone around.

Or, it could be when she turned 13, when she seemed to think that rules didn’t apply to her.

She has always been one to push limits, question authority, and speak her mind no matter what the cost.

Sometimes her confidence seems like her greatest asset. Sometimes it gets her into trouble.

She is a teen now and doesn’t enjoy being told what to do.

When she was younger, I told myself that this is a phase, and I reminded myself of the positive attributes of my daughter, which there are many.

She is a strong student, a gifted athlete, and considered a leader at her school.

She can be incredibly kind to someone in need and will drop everything to help a friend. She is fun to be around and has a wicked sense of humor. She is passionate about social issues and wants to change the world.

Sometimes I am so proud that she is so headstrong, so deliberate, so strong-willed.

And sometimes, in our home, I didn’t like her that much.

Sometimes we watch as she attempts to manipulate us, telling us excuse after excuse.  Sometimes her endless questions and belligerent responses were exhausting. Sometimes her actions seem so deliberate, so selfish, so incredibly insensitive that sometimes although I love my daughter deeply, she makes it difficult to like her.

I’ve talked to other moms, veterans of the teenage years many times over. They assure me it is normal. They say these qualities will help her thrive in this challenging world.

And I tried to keep those words in mind. But this constant push-and-pull relationship while trying to build trust is terrifying.

I tried to ignore the minefield of topics that set us off, but we both walked around like ticking time bombs.

This is how it would go:

She would ignore something we asked her to do. I moved in with a reminder; she responded with a curt “I know.” I start to lecture; she rolls her eyes. We push and pull until the thin thread that holds us together breaks, and I have an out-of-body experience.

She made some big mistakes. She lied. She was mean. She lost our trust.

And I didn’t handle it well.

When I tried to talk to her, I heard the words coming out of my mouth, but they don’t sound like mine. They are loud and accusatory. Mean-spirited and judgmental. Not appropriate for a conversation with a young girl.

She would lash out, say awful things, slam the door to her room.

We would apologize. I promised I would do better. So would she.

But we could not break the cycle. I feared we would be at each other’s throats until she moved out of our house.

This Was Not the Relationship I Wanted with My Daughter

One day, after a particularly bad argument, I looked at the beautiful girl in front of me and I could almost see a small piece of her vibrant personality break off her tiny frame and disintegrate into dust. With each disastrous encounter between the two of us, a little bit of the sparkle leaves her dark eyes and her jaw becomes a little more clenched.

I watched as the happy little girl I once rocked in my lap became a shadow of her past self, and I was the mother I said I would never be.

I almost broke her spirit.

I know I was the same type of teen. I had the same overconfidence. The same feeling that I knew more than everyone else. The same strong-willed spirit.

This is certainly payback.

Something definitely had to give.

My teen daughter and I are so alike that we butt heads like two rams fighting for the same space.

We are so different that sometimes we feel like we live on separate planets.

I have a problem with biting my tongue. She likes to have the last word.

Sometimes we both go too far.

And I almost broke her spirit.

Truth be told, I messed up a lot. So did she.

When our relationship was good, it was great. And when we went off the rails, we went a mile off the tracks.

I nitpicked about the small stuff and lost my mind about some of the big things. I needled. I pried. I threatened and yelled.

She dug in sometimes and ignored me on other occasions. She broke the rules.

Both of us were wrong, but neither of us was right. But sometimes I forgot I was the grown-up.

I can’t take back some of the words I said to my daughter any more than I can uncrack an egg—but someone once told me that discipline without love equals rebellion, but discipline balanced with grace often grows into respect.

This Is How I Got My Relationship With My Strong-Willed Teen Back on Track.

It is such a delicate balance parenting teens, wanting neither to be too controlling nor too permissive; wanting a child who is independent yet obedient; wanting to raise a resilient adult who likes you a little bit too.

But, there came the point when the incessant battling with my daughter became more of a self-fulfilling prophecy than a productive relationship, and I no longer wanted to be the source of either of our pain.

So I gave my daughter the only thing left that I could muster: space.

I stopped nagging her on the little things, such as cleaning her room or coming home five minutes late, and instead wrote down a set of rules that were non-negotiable. When she broke them, we simply referred back to the rules and issued a consequence instead of lecturing for hours.

I praised all the goodness and bit my tongue whenever possible.

I stopped punishing her for every wrongdoing, and instead, tried to tell her in as little words as possible what I expected of her. Then I would take her out for a coffee so we could try to enjoy each other’s company.

I stopped telling her what I thought she should be doing, and instead let her take ownership of her actions. It was difficult to watch her fall, but there were important lessons she needed to learn for herself.

And I tried to be a role model, with my words, with my actions, and most importantly, with how I offered love.

I gave up some control.

I gave grace even when it pained me to my core, and tried not to take her words personally.

I didn’t let her walk all over me, but she always knew she was loved.

And sometimes it was so hard.

But when I backed off, I watched her spirit soar in the beautiful ways I knew it could. She became kinder and more considerate and (mostly) easier to get along with. We learned how to enjoy each other and found a mutual respect.

Our relationship isn’t perfect, but I’m proud of how far we’ve come.

I almost broke my daughter’s spirit, and what a loss to the world that would have been.

I am hopeful about our relationship. Her attitude still bothers me; she still senses my frustration.

But sometimes she bounds into the house after school and breezes by my cheek just long enough to plant a soft kiss. Sometimes we dance together in the kitchen while making our favorite chocolate chip cookies. Sometimes we laugh at silly jokes and talk about traveling to far off places.

Sometimes she lets me in and shares secrets about her life and dreams she has and how she wants to make things better.

And I see the spirit of a girl who can conquer the world.

If only a loving, well-meaning mother doesn’t get in the way.

Parenting teens and tweens is hard, but you don’t have to do it alone. Here are some other posts that our readers found helpful.

How To Have A More Peaceful Relationship With Your Teen: Guaranteed