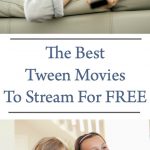 When your kids become tweens, they will often decide that they are “too old” for many of those “baby” movies that are rated G, and will start to push the boundaries about what they think that should be able to watch.

This can be a tough time for you and them. Some PG movies make you cringe and PG13 movies are even more of a minefield for parents. Also, so much of what is appropriate really depends on your particular family and your particular kid. Not all kids are in such a hurry to grow up and not all kids are ready for those more adult and teen movies they think they want to see so badly.

So, if you are trying to find some fairly safe and neutral ground when it comes to those in between tweens, here are some of the best tween movies to stream right now (and yes, there are a few 80’s movies in there for you parents). The service these tween movies are on for free streaming is listed, but you can rent almost all of them on Amazon for a couple of bucks.

The Best Tween Movies To Stream For FREE

“Stargirl” is a tender and offbeat coming-of-age story based on the critically-acclaimed, New York Times’ best-selling young adult novel about an unassuming high schooler who finds himself inexplicably drawn to the free-spirited new girl, whose unconventional ways change how they see themselves…and their world.

Middle School The Worst Years of My Life (Netflix)

Rafe, a budding cartoonist, and his pal Leo decide to challenge their uptight principal and break every rule on the books at Hills Village Middle School. As you might expect, hijinks ensue.

A Wrinkle In Time (Disney Plus)

Based on the book by Madeline L’Engle, this family favorite movie follows Meg, her younger brother Charles Wallace, and their friend as they go on a quest to save their father from the heart of darkness. Come for the star-studded cast, stay for the exciting, captivating story.

Back To The Future (Netflix)

The 1985 classic starring Michael J. Fox as time-traveling teen Marty McFly who travels back to the 1950s in a DeLorean time machine invented by the lovably eccentric Doc Brown (Christopher Lloyd). But when he accidentally interferes in the romance between his own parents, Marty threatens to erase his own existence. He will have to help his dad stand up to the school bully to make sure he has a future to go back to. The movie is a great mix of adventure, comedy and heartfelt emotion.

This movie is definitely quirky, but in an endearing sort of way with an incredibly cast. Set in rural 1977 Georgia, a misfit girl dreams of life in outer space. When a competition offers her a chance to be recorded on NASA’s Golden Record, she recruits a makeshift troop of Birdie Scouts, forging friendships that last a lifetime.

Spiderman: Into the Spiderverse (Netflix)

After being bitten by a radioactive spider, Brooklyn teen Miles Morales gets a crash course in web-slinging from his alternate-dimension counterparts. Funny and oddly heartwarming all at the same time, this story really breaks the mold of the typical superhero movie is surprisingly refreshing way.

A tender, funny story of an 11-year-old girl’s momentous summer of discovery–the summer of her first crush, her first kiss, and her first step on the path to growing up. MY GIRL stars Anna Chlumsky and features Macaulay Culkin as the shy neighborhood boy whose friendship leads to her awakening.

This action-packed film about a third-generation treasure hunter will keep older kids entertained and on the edge of their seats. Parents will also like the touches of history added to the film that make it subtly educational.

Remember the Titans (Disney Plus)

Based on actual events that took place in 1971, a white southern high school is integrated with black students from a nearby school. Both schools are recognized for their football programs which are now unified. The black coach is chosen to be the head coach of the integrated team, leaving the previous white head coach with feelings of animosity at having to be an assistant under a black man.

Honey, I Shrunk The Kids (Disney Plus)

a preoccupied inventor who just can’t seem to get his electro-magnetic shrinking machine to work, accidentally shrinks his kids down to one-quarter-inch tall and tosses them out in the trash. The real adventure begins! Now the kids face incredible dangers as they try to make their way home through the jungle of their own backyard!

The Adventures of Mickey Matson And the Copperhead Treasure (Amazon Prime)

When a mythical device from ancient times is rebuilt by a group of Confederates who feel the Civil War never ended, Mickey Matson and his newfound friend, Sully, must follow a series of clues left by his dead grandfather to keep the evil men away from the three mystical objects that power the device. If he fails, it could mean not only the loss of his family’s house, but maybe the demise of our country as we know it.

When mischievous friends Yi (Chloe Bennet), Jin, and Peng discover a young yeti on their roof, they name him Everest and embark on a thrilling adventure to reunite the magical creature with his family. On the journey of their lifetimes, Everest helps Yi, Jin, and Peng unlock an inner bravery they didn’t know they had. And as they travel across China to return the magical creature to his home, Everest will help them discover where they truly belong, too.

Annabelle Hooper And The Ghosts of Nantucket (Netflix)

While vacationing on picturesque Nantucket, a crafty teenage mystery writer contends with two thieves as she tries to solve a ghostly conundrum.

At a school in the sky where teens learn how to be superheroes, Will Stronghold (Michael Angarano) lands in a class for students who show special promise. Classmate Gwen (Mary Elizabeth Winstead) quickly cozies up to Will, but it’s soon clear that she has other motives. When he learns that Gwen’s mother is a villain who was defeated by his father, Steve Stronghold (Kurt Russell), Will realizes that Gwen is aiming for revenge, and he rushes to a school dance in the hope of stopping her.

Four Jamaicans form their country’s first ever bobsled team to compete in the upcoming 1988 Winter Olympics. They enlist the help of a disgraced former Olympic gold winner to reluctantly coach them. However, when they reach Canada they’re treated as outsiders by the other teams, who fear they’ll only succeed in embarrassing the sport.

Parenting Teens and Tweens can be hard, but maybe these popular posts that other parents found helpful can make it a little easier.

The Best Documentaries To Watch With Your Teens and Tweens