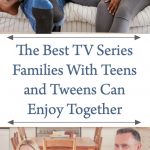 In this article: TV shows for 9-12-year-olds can be tough to find, so we put together a list the whole family can enjoy.

Finding TV shows that everyone agrees on and likes can be kind of tricky when you have tweens in the house. It gets even more complicated if you have tweens and teens because the same content isn’t always appropriate for the different age ranges.

And if you are going to have your family spend more time online, you want to make sure it’s for a good reason and with some purpose.

A recent study by Common Sense Media found that online video viewing is through the roof: More than twice as many young people watch videos every day than did in 2015, and the average time spent watching has roughly doubled.

To be honest, part of the problem just feels like a lack of good quality shows. My husband and I have a hard time finding things even just the two of us want to watch. Everything is so violent or over-sexualized or just plain weird. It really is hard to find anything that a whole family is comfortable watching and can enjoy together.

It also makes it difficult when there is a large age gap or not a lot of shared interest in your house. For example, what my 12-year-old girl wants to watch on TV and what my 16-year old son is interested in viewing is pretty varied. There is a big maturity jump between middle school and high school.

After a little trial and error, we’ve found several that have been universal favorites in our household and are appropriate TV shows for 9-12-year-olds. They aren’t perfect and depending on your views and values, you may not find that all are a fit for your family, but at least a few should be winners. If you are not sure, feel free to check out their ratings and other info on Common Sense Media.

Or you can make a judgment call on TV shows for tweens by checking the TV Parental Guidelines on the shows your kids want to watch.

P.S. Looking for a good movie for family movie night? You may like this list of 20 Fun and Heartwarming Modern Teen Movies on Netflix or The Best 80’s Teen Movies Every Parent Should Watch With Their Teens.

The Librarians (HULU)
Adventures of 4 characters with unusual skills and abilities all chosen as “librarians” to protect a cosmic library where magical artifacts are collected and stored. The librarians, along with a special guardian, investigate odd happenings in the mortal realm related to missing/stolen artifacts and other magical creatures who wish to steal the powers of the library and shift the balance between good and evil in the world.

Merlin (Netflix)
A reimagining of the King Arther stories with all the characters as young adults, including knights, ladies of the court, sorcerers, etc., and told from Merlin’s perspective. A little violent with some scary creatures so maybe not ideal for more sensitive tweens. Also, some romance, but nothing blatant.

The Mandalorian (Disney+)
This is one of the premier original shows on the Disney channel. The Mandalorian is set after the fall of the Empire and before the emergence of the First Order. It follows the adventures and trials of a lone gunfighter in the outer reaches of the galaxy far from the authority of the New Republic. He unwittingly finds himself the guardian of a powerful creature of unknown origin who he now must protect from falling into the wrong hands.

One Day At A Time (Netflix)
A modern version of a TV classic, a newly single Latina mother raises her teen daughter and tween son with the “help” of her old-school mom and the owner of the apartment building they all live in. Funny and sweet, but definitely addresses issues of our time including sexuality, mental health, and politics, so it may not be as suited to young viewers.

Lost In Space (Netflix)
When they are recruited for a special space mission, which is undermined by mysterious circumstances, The Robinson family (estranged parents, two teen girls, and a tween boy) crash lands on a mystery planet. The family fights against all odds to survive and escape. But they’re surrounded by hidden dangers.

A Series Of Unfortunate Events (Netflix)
Based on the classic book series, The extraordinary Baudelaire orphans face trials, challenges, and the evil Count Olaf in their fateful quest to unlock long-held family secrets. Along the way, they meet many quirky characters who both help and hinder their progress. (And it’s Neil Patrick Harris in one of his best roles, so that alone makes this series worth watching)

Encore (Disney +)
Kristen Bell (yes, THAT Kristen Bell!) brings together former castmates of a high school musical and has them re-create their original performance. In a high school reunion like no other, emotions run high as the former students face faded friendships, former flames, self-doubt, and killer choreography.

Gortimer Gibbons Life On Normal Street (Amazon Original)
Personal Review: This is one of my all-time favorites! Just the right combinations of quirky, sentimental, original, and life-affirming script. It’s true feel-good TV with depth and real storytelling, which is rare in today’s entertainment landscape. The bonus is it’s available on Amazon Prime.

Life is anything but normal for Gortimer and his two best friends, Ranger and Mel, as they navigate Normal Street – an ordinary suburb that has a hint of some magic just beneath the surface.

Once Upon A Time (Netflix)
In this fantasy series, a young woman is drawn to a small Maine town and discovers that there is more to her identity than she could have ever imagined. In fact, her story might almost be called a fairytale, and the other people in the town are her fellow characters.

This series is definitely one of the darker in the franchise, and some of the episodes may be too dark for some tweens. If you’re looking to introduce your kids to some of the earlier series, then try Star Trek: Next Generation on Netflix or perhaps the newly released Piccard(CBS All Access FREE)

Locke and Key (Netflix)
After their dad’s murder, three siblings move with their mom to his ancestral estate, where they discover magical keys that unlock powers — and secrets.
(Note: This show could be a little scary for young tweens)

Heartland(Netflix)
A family drama series set in the rolling foothills of the Rockies, “Heartland” follows life on the Heartland ranch as Amy Fleming (Amber Marshall), her older sister Lou (Michelle Morgan), and Grandfather Jack (Shaun Johnston) deal with the challenges of running the ranch that has been in their family for generations.

Firefly(HULU)
The Crew of a starship travels through outer space after Earth’s resources have diminished in the year 2517. Captain Malcolm “Mal” Reynolds steers his bandit-crew through anything to keep them alive and keep flying.

This was a big surprise to us, and when I first heard about it I thought it sounded crazy, but my tween and teenager both liked it. This cartoon-like show about some off-brand Sanrio bears who live with a 20-something Japanese woman who’s just trying to manage her life is sweet, warm, and everything we need during these challenging times.

If you are a family who loves fantasy, this is for you. It’s a prequel of Jim Henson’s classic film The Dark Crystal. With a star-studded voice cast including Sigourney Weaver, Andy Samberg, and Awkwafina, it is full of magical worlds and adventures guided by powerful CGI and puppets. It’s like the Muppets on steroids.

Looking for ideas for TV series for teens and tweens?

Here are a few others that were suggested that are good for both tweens and teens:

Bonus: TV Series for Teens and Tweens that are good for any random night.

While not exactly series, these game shows and other types of entertainment can be good for just a one off watching experience or an occasional family TV night.

Minute To Win It (Netflix)

Perhaps Watching A TV series is too much of a commitment. In that case, you might also check out these other popular posts for activities you can do with your tweens and teens.

The Best Ted Talks for Teens

15 Of The Best Adventure Book Series For Tweens

Previous Post
« Dear Parents, Your Hard Work Is Shining Through in Your 16-Year-Old Daughters
Next Post
It's Hard to Stop When Raising Teens and See The Great Kid in Front of You »