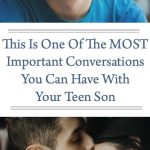 There’s nothing like your teen having his first serious girlfriend to up your anxiety about the birds and the bees. This is reality time…or at least it might be. Did I give him enough information? Is he prepared to treat her well—and to use protection if things go that far?

I was pretty sure I’d given my kids good information about relationships and sex, including contraception and preventing STIs. But there was an angle I realized I might have missed: why my son should care about birth control every bit as much as my daughter should.

Parents tend to worry more about their daughters being protected than their sons. With good reason, of course. A teenage girl with an unplanned pregnancy faces some very difficult choices, and we really don’t want our child to have to deal with that. It can be life-changing.

For guys, the situation is different, but equally important. As I explained to my son:

“If your girlfriend got pregnant, she’d have a tough decision to make. But it’d be her decision, not yours. If she decided to keep the baby, you’d be responsible for 18 years of child support, at a minimum. And I’d insist you’d also be a caring, involved father, because that’s the right thing to do. That means instead of going off to college as planned. you’d have to work and maybe go to college part-time while living at home. So if you decide to have sex, even if she’s using hormonal birth control, which hopefully she would be, also use a condom. You both need all the protection you can get.”

I can still see the look on his face. Obviously this was something he hadn’t thought of, and it made an impression.

If you have a similar conversation with your son, you can bet you’ve gotten his attention. It’s a perfect moment to make sure he understands the basics of birth control. Just do it in a way that lets him save face.

So try something like: “You probably already know this, but there are two main forms of birth control: hormonal, like The Pill and implants, and barriers, like condoms. Condoms are the only thing that prevents STIs, so you need to use them every time you have sex. Condoms are also fairly effective at preventing pregnancy. But the Pill is even more effective—provided the woman takes it every single day. Long-acting reversible birth control, like implants and IUDs, is super-reliable, and she doesn’t have to think about it once it’s in. But of course she’d need a doctor to insert it.”

You may now pause to let the information sink in and let both of you breathe a moment. If he has follow-up questions, answer them, or go look up the answers together on a reputable site like WebMD or GoAskAlice. Also point out that BC is something he can ask his doctor about at his next visit.

If your son is thinking about having sex and hasn’t talked with the girl yet about birth control, he may not know where to start. Give him some sample language and let him take it from there.

“I know it can be really awkward to talk with a girl about this stuff. But if you and Katie reach a point where you might be ready to have sex, you need to be mature enough to talk about protection. That means asking whether she’s already using some form of birth control and how long she’s been on it, because some kinds aren’t effective right away. Some girls take The Pill for reasons other than sex, by the way, like to reduce period cramps. If she isn’t already using birth control, I strongly encourage the two of you to get medical advice about what makes the most sense for her. It’s her body, but that doesn’t mean it’s all on her to take responsibility. I expect you to be the kind of guy who’d want to protect your partner as well as yourself.”

Info and Your Values

This conversation is hard for many parents. It can be especially challenging if you strongly want your child to wait to have sex.

That’s a legitimate part of the conversation. You can and should talk with kids about your sexual values, part of which may be waiting for marriage, a committed relationship, or a certain age.

You could say for instance, “I’m giving you this information because I think it’s so important that you and Katie not risk an unplanned pregnancy. But I really, really, hope that you won’t have sex until ____. Not having intercourse is the only absolutely sure way to avoid pregnancy. Please wait. But if you don’t wait, be safe, for both your sakes.”

Every teen is different, of course. As they get older, they’ll make their own choices, whether we like them or not. But real-world information about sexual consequences gets teens thinking—and, hopefully, making smarter decisions, whenever their time comes.

Why Is It So Dang Hard to Talk with Teens about Sex?

Dear Teen Son, Don’t Be in Such a Hurry To Become a Man

Previous Post
« Dear Mom Struggling With Her Teens, Don't Forget The Girl You Used To Be
Next Post
How To Be A More Patient Parent With Your Teen »