Home / Blog / Our Teens Are Really Struggling With Social Media Right Now, Here Is How To Help 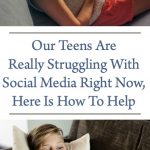 Like every other parent of a teenager, I was a little more lax about screen time the past few years. I mean, there are days when it is cold and rainy and no one wants to play one more game. Or now that things are returning to normal, I don’t want to spend all my time nagging.

So, I don’t say a word when I walked past my teens sitting on the couch, faces in their phones hour after hour. There have been times I’ve let them play video games late into the night or when I’ve been pretty sure they’ve almost worn out Netflix. I didn’t check on them every time they were in their room for hours, even though I knew they were probably on some sort of device or making a TikTok or scrolling.

But this week, one of my normally “fairly” even-tempered teens has been over-the-top snarky and kinda mean. Another seems to come to tears at every turn. And my third seems suddenly withdrawn and depressed. When I talked to a few friends, I heard a similar theme. A lot of acting out, a lot more anxiety, a lot more tears.

I’ve been trying to talk to my kids more this week, but honestly, it’s been tough. Their feelings are valid. I don’t think there’s a person out there right now who doesn’t feel the heaviness of our world in one way or another. I think we are all worried and uptight and unnerved.

But I also can’t let things go on this way and watch them sink farther into the abyss of their phones. When the world seems dark, I don’t want them continuing down that lonely rabbit hole. I need them to come up for air and light. I need them to be able to identify when they need to check their behaviors and when we should be talking about their feelings.

So, we had a family meeting and had to set new rules (see below), and I was a little surprised when one of my girls admitted she had a major problem putting her phone down. She had gone on Amazon and found a safe that would store her phone for a certain amount of time and wouldn’t let her access it until time was up. Another mentioned that there was nothing she wanted to do more than watch videos so she didn’t have to think.

I’ve always felt I was more strict with technology than other parents, primarily because it’s my business. My job literally is to be on social media all day (and some nights) for my clients.

I know all the dangers, I made all the rules, I did all the monitoring.

But sometimes, we just miss what’s sitting right under our noses. And let’s be honest, life is nuts right now.

Yesterday we started a slow detox of phone and tech. We talked about active and passive tech usage (active being using your phone to help you cook or do a workout as opposed to passive for just scrolling.)

We turned off phone notifications so their screens wouldn’t constantly be flashing as a reminder that they might be missing something. And they can’t remain isolated in their bedrooms.

And I’ve got to walk the walk, too.

But we have to protect our kids’ mental health in these difficult times. We have to watch for signs. We have to stay active–even when, especially when, it’s hard.

Be aware of your kids’ behavior and when they change. Once you identify these, it gives you the power to help them address it, which is one of the most important lessons we can impart on our kids.

Just in case you need somewhere to start, here are a few of the rules we implemented:

– No phones after 10 p.m. and don’t let them keep them in their rooms overnight (They can stay up later than 10, they just can’t be on screens)

– Turn off ALL notifications for social media and other apps

– Everyone had to pick one non-screen hobby to work on

– One screen at a time (i.e. not watching a show while also scrolling TikTok)

– Regular check-ins to talk about what they’ve been seeing on social media or online.

Parenting Teens and Tweens can be hard. These popular posts that other parents found helpful might help make it a little easier:

Previous Post
« Dear 17-Year-0ld, Don’t Listen To The Lies the World Tells You
Next Post
50+ Screen-Free Activities for Tweens and Teens »