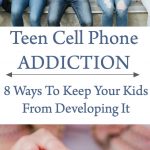 Inside: Teen cell phone addiction is real, but it is important for parents to understand it’s never too late to enforce some tech boundaries.

Recently, a friend took in her 13-year-old niece for the summer because her parents fell on some rough times.

At first, she gave the young teenager quite a bit of grace with her cell phone behavior. She recognized how overwhelming it must be to leave your home and temporarily move in with someone else.

She didn’t say anything when the teen sat on the couch for hours scrolling and scrolling. She didn’t pipe in when the young girl walked around the house with her nose in her phone. She tried not to scold her when she repeatedly said “Wait just one minute,” so she could finish a text instead of responding to a question.

Finally, when the girl tried to bring her phone to Sunday family dinner, my friend had enough. She told her niece to leave her phone at the counter for meal time. 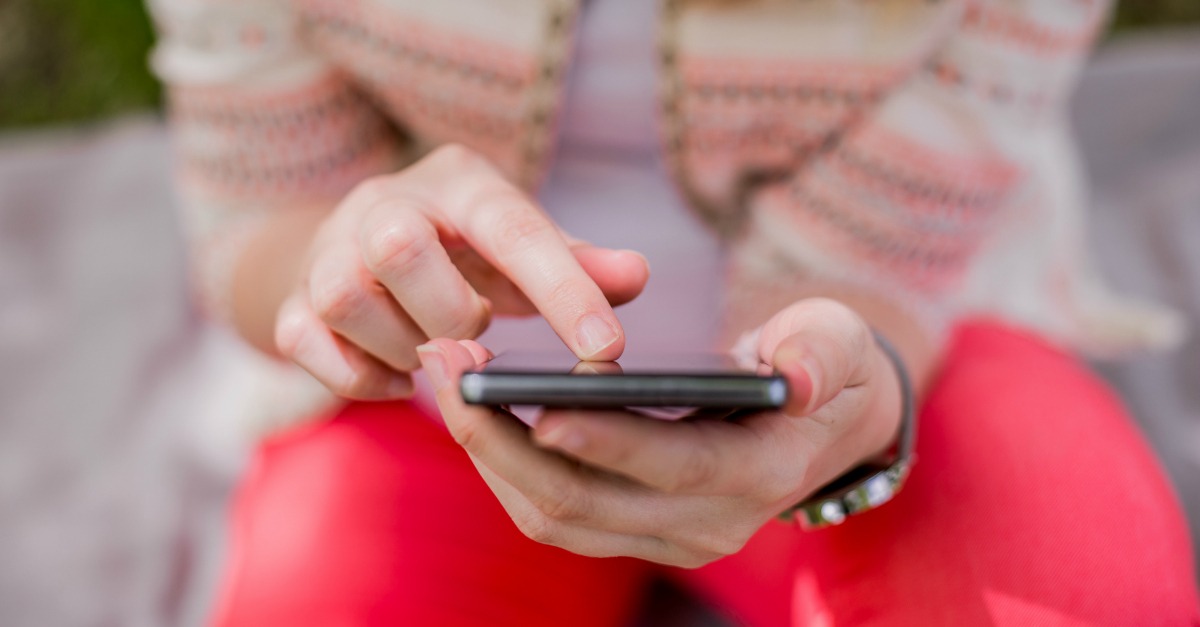 First, there was an entire tech tantrum about how the rule was unfair.

When she finally made it to the table, she turned around to look at the phone every time it buzzed. She did not participate in any of the conversations and wolfed down her meal, asking to be excused the moment the last bite went into her mouth.

She didn’t even wait for an answer, she just jumped up and went straight to her phone.

The next week, my friend found that the young girl was staying up all hours of the night, sleeping with the phone under her pillow so she could hear any messages. When her Aunt made her shut the phone off, she constantly thought she heard vibrations, even when the phone was powered down.

She appeared uncomfortable and jittery when her phone was not within reach and started lying about when she was using it.

This teen had a serious smartphone addiction.

While this young girl’s story scared me, I also get that cell phones are common place in the lives of teens and adults today. I believe that even if you use your phone the majority of your day, it doesn’t necessarily make you “addicted.”

And let’s get real, we’re not really going to ban all teens from cell phones.

The truth is, in today’s digital world, smartphones do make our lives easier. It’s simple to use it to check for weather updates, communicate with friends, finish homework, complete work tasks, order food, and so much more.

But, as with anything in parenting, you should always know where the tipping point is for your child. You need to be able to recognize the signs of cell phone addiction and be aware it could be different for each child.

Technology isn’t going away, but we can reduce our teen and tween’s vulnerability to cell phone addiction.

A great way to do this is by establishing healthy boundaries and habits and making sure you set some very clear cell phone rules for teens and tweens.

Looking for a cell phone contract to help you manage your child’s neew device? Here’s one that works for us!

Addiction means you cannot control your desire to do something that may be harmful to yourself or others.  Excessive use of your smartphone can definitely be an addiction, and some studies report that more than a quarter of all teenagers say they are addicted to social media.

Many adults cannot wrap their heads around how addicted their teen is to their cell phone, but some researchers say that the withdrawal from an iphone could be similar to the withdrawal of nicotine/smoking.

Some signs and symptoms your teenager may have some sort of addictiocell phone addiction include:

+ They appear anxious or panic when they have to put their phone down or can’t check it.

+ The first and last thing they do each day is check your phone.

+ They are overly concerned with getting a post “just right” and monitoring how it performs.

+ Their mood is severely altered (either positively or negatively) after checking their phone.

+ They constantly think they hear their phone buzz (even when it doesn’t.) These phantom vibrations often occur during school or other times when your teen is not supposed to acce their phone.

+ They start detaching from activities and people they used to enjoy in favor of scrolling. 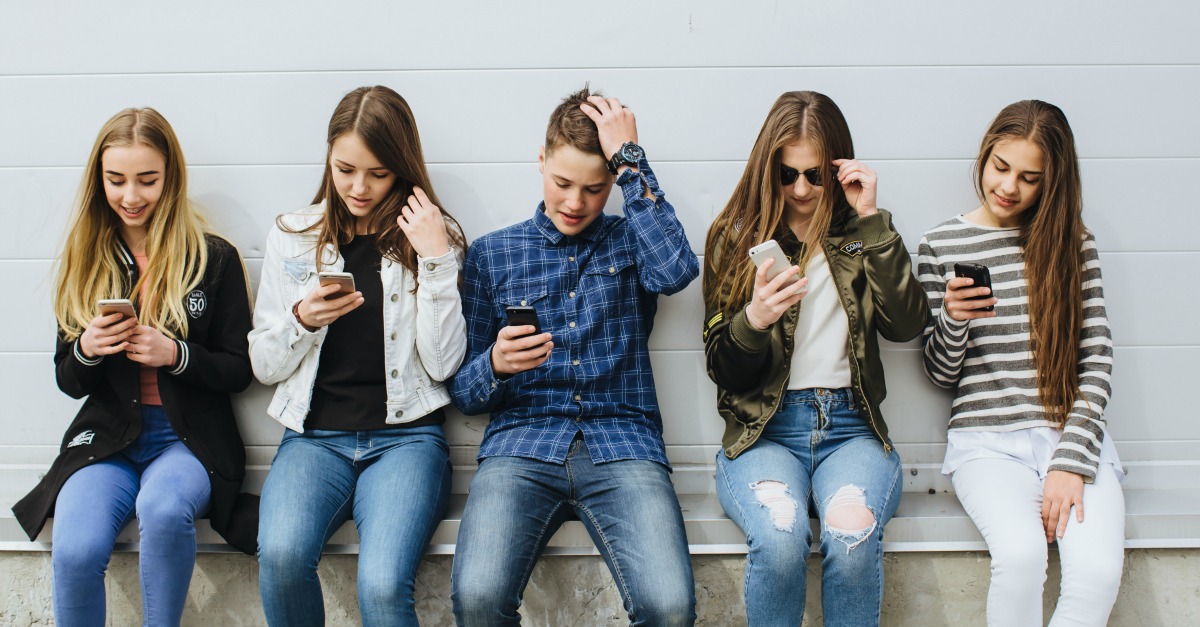 The amount of time you allow your child to be on their phone is personal. One teen’s cell phone usage may be more than others, yet they have no problem with it. Another teen’s smartphone use could be less, but their inability to disconnect is worse.

What we need to keep in mind as parents is that our tweens and teens brains are still developing, specifically when it comes to decision making, and impulse control. It is our job to set boundaries and rules to keep our kids safe and healthy.

No Phones at Bedtime:

We all know teens today are over scheduled with school work, activities, jobs and working towards college or whatever comes after graduation. And study after study show that adolescents are not getting enough sleep. Set up a charging station that you can monitor and make sure your kids adhere to putting their phones in it roughly an hour before bedtime. In our house, it’s 9:00 p.m. on school nights and 11 p.m. on weekends.

Okay, maybe not the entire day, but I like to take my girls on family outings, such as hikes, the movies, or shopping, and we leave all the cell phones home except for one, which can’t be used unless it’s an emergency. It’s good for parents and kids alike to know that they can go hours (or gasp, even days) without using their device.

Additionally, in today’s volatile times, it is critical that tweens and teens know when their phones are impacting their mental health. Pew Research Center confirmed that teenagers who use social networking sites over 3 hours daily are at higher risk of having mental health issues. The study also revealed that 66% of teenagers use social media for more than 2 hours a day. The same teenagers also reported having more mental distress and being more prone to anxiety

Too much time on social media can put your child at risk for cyber bullying, body image issues, anxiety, depression, self-harm, low self-esteem, and other mental health and behavioral disorders. While feeling connected to a group can be a positive thing, becoming obsessed with checking the status of other people can be a sign of addition.

Only One Screen at a Time:

One of my pet peeves is when I see my three daughters sitting on the couch watching a movie and scrolling through their mobile devices; Or, when they are using the computer for homework, yet continuously stop to text or use SnapChat. If you can’t finish a task without checking your phone, in my opinion, you have a problem. So, we instated a one screen at a time rule, so my kids learn to remain focused and in the moment of whatever they are doing at the time.

No one, and that includes Mom and Dad, should bring their phones to the table. We only get to eat dinner together as an entire family a few times a week, so that is the time we catch up with each other. If you don’t want to talk, you don’t get to fill the void with your phone. Period.

My daughters find a new game to play on their phone every week or ask for a new social media app. Sometimes they have a hard time pulling themselves away, and I find that they sneak to finish one more level or scroll one more post. I set up time restrictions so they can only access specific apps on their phones during certain time periods. For example, they can’t access games and social media until after school, so it isn’t a distraction.

If their homework is done and rooms are clean, I let them have an hour or two where they can use their phone without me pushing the rules down their throats. Whether I like it or not, teens connect digitally, and I remember spending hours on my hot pink phone in my room on a three-way call with my friends. Although I know my parents thought it was ridiculous, they let me find that time to bond with my friends.

You might also like The Benefits of a Family Digital Detox And How To Do It (parentingteensandtweens.com)

One evening we came home late from an event and I decided to clean up the kitchen before heading upstairs. I was amazed at how many notifications were going off for my middle schoolers’ devices at 11 p.m. Text messages, SnapChat, Instagram, YouTube notifications. There screens were flashing incessantly.

While this affirmed my decision to keep phones out of their bedrooms during the late night hours, I still noticed my  daughters always wanted to peek at their phones to see if anyone had texted, posted, messaged, etc.

When we turned off these notifications, and they did not constantly appear on the screen, my teens desire to check their phones plummeted.

We all follow the same rules in our house, even Mom and Dad. It’s easy to use the “work” card, but to truly show your teens they don’t need their phones 24/7, you have to demonstrate that you don’t either.

How do you guard against teen cell phone addiction in your family?