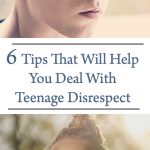 The door opens and in walks the tween or teen. You can feel their arrival, before you even see them because the energy in your home completely changes almost instantly. The skin on your arms and the back of your neck begin to stand on end.

There are two ways this situation could go at this point.

There will either be the “disappearing act” where your tween or teen tries to escape to their room without having to make eye contact or have in any kind of human interaction.

There will be feet stomping, loud sighs and mumbled grievances followed by a theatrical dumping of their school books onto the floor or table. Next will be mean looks in the direction of siblings, pets and any other living creature near them.  Any attempts to engage will be met with eye rolling or the silent treatment. Perhaps there might be an “ugh” or “whatever” muttered under their breath as they head straight for the fridge.

Dealing with disrespectful teens and tweens can be frustrating. At any moment you never know what kid is showing up and whether its going to be another angry confrontation or a lot of worry for no good reason. But honestly, half the time they aren’t sure either.

It’s tough and confusing – for both of you.

Raising tweens and teens is complicated and frustrating and exhausting. But we all have a better shot and not just surviving, but even finding moments where we can truly enjoy these moody adolescents, if learn how to build bridges, rather than burn them down.

Using these five tips to handle disrespectful teenage behavior can help keep the peace when your tween or teen is trying their best to turn your home into a battleground.

6 Tips That Will Help You Deal With Teenage Disrespect

1. Recognize When They Are Trying To Pick A Fight

When your child is standing there in front of you with their face full of attitude and nonsense coming out of their mouth it can be so hard to keep it together.

One of my favorite stories ever is from a mom with two teen girls who I thought was Disney princess patient. I was convinced there was nothing that would make her ever lose it with her kids. Then on day, she and her family were sitting outside having dinner. Her oldest daughter was in a mood and was being unpleasant and rude to everyone else at the table, and just making the whole meal unbearable. As the whole drama progressed, mom finally got so fed up, she picked up her cup and hurled it right past her daughter’s head and into their pool.

“I really wanted to throw that right at your head,” she said.  “You’re lucky I love you enough to miss.”

Now this isn’t to suggest that hurling things at our teens is any kind of solution, but it is an example of how good our children can be and really pushing our buttons. Sometimes, even the best of us won’t always be able to be the adult in the room.

However, we need to do our best to remember that we ARE the adult. And when we sink to their level by getting angry and yelling (and throwing things) it only adds fuel to the flames of their teenage rage. It also puts us in the position of becoming an unintended role model validating the same behavior and actions we’re attempting to change in them.

Yeah, it’s hard, really hard. But even though it may require enormous willpower and strength of heart on our parts, when we can keep our voices at normal volume and tone, it puts us in charge of the rules of engagement and removes some of their power.

Just tell them that you’ll be happy to listen or talk with them about whatever is going on when they can do so in a more reasonable way.

They want to be in control and their goal is to get you to play the game on their turf, where they’ve got the upper hand. When you refuse to engage at their five alarm fire of intensity, it disarms the situation.

Allow them some space and time to cool down.  Then discuss the issue when everything isn’t so emotional for them (and you).  But be sure they know you’re not blowing them off or letting them off the hook. You might even set a specific time, like after dinner or the upcoming weekend.

Either way, you’ve taken what they wanted to turn into a confrontation and enabled it to become something far more productive – a conversation.

3. It’s Not Personal (No Matter How It Feels)

Tweens and teens know exactly how to wield words as weapons.  They understand how to cause the most damage with even the simplest things they say. And because we are their parents, we become the most common targets in their ongoing battle of them against the world.

Wow, their words can be vicious, but we need to realize it really isn’t personal.

The tween and teen years are filled with so much angst.  Hormones are raging, bodies are changing in confusing and weird ways, and their brains aren’t yet fully formed to help them cope with it all.

They are also caught in this place where adulthood is coming at them faster and faster so they really want more independence, but at the same time they still crave approval from everyone in their life – parents to peers.

While it was a million years ago, we were teens too. Try to think back to what it was like back then for you.  You must have said some things, or maybe lots of things, to your parents that you regret. But as long as you came from a fairly healthy home, you and your parents survived and most likely have a good relationship now.

For the most part, the disrespect and bad attitude of our tweens and teens is a simple defense mechanism.  They’re insecure and afraid and often this is when our kids lash out the most. They are testing us, looking for reassurance that we will love and support them, no matter what.

So, even at their worst, we need to meet them where they are with love.

4. Rules and Respect Are A Must

Now, we can show our teens love without allowing them to treat us like door mats.  We should  all take the following words to heart, “Unconditional Love Doesn’t Mean That You Have To Unconditionally Accept Bad Behaviors.”

Giving grace is an important part of these tween and teens years, but so so is setting limits. They may look more and more like adults, but they are still children in many ways. They not only need, but believe it or not, they often want boundaries.  It helps them understand expectations.

They should be allowed to have bad moods and they can be angry with us. We as adults are allowed those things. So, we need to give them the space for all those emotions.  However, in the process we need to guide them on how to properly express those emotions and what the rules are when it comes to their behavior.

Although TV shows, social media and many other influences our older children are exposed often provide bad examples, we have to be the balancing voice reinforcing that speaking to others disrespectfully is not acceptable.

It’s also more than okay for us let our tweens and teens know when they’ve hurt our feelings. Making them think about how the things they say and do impact others is vital when it comes to developing empathy.

If they want to be treated like adults, they have to act like adults. We show them how by defining what being disrespectful and hurtful looks like and by consistently enforcing the consequences when they cross the line.

5. Try Not To Lecture

When it comes to enforcing consequences, it can be SO tempting to full on school them about all the reasons why the way they are acting is wrong headed and immature.

Tweens and teens are often beyond sure that they are the smartest people in the world. The crazy thing is they think this way because their brains aren’t fully developed. They are at a stage in life where they are more likely to engage in impulsive behavior and they really can’t fully appreciate or even fully think through the long-term consequences of their decisions.

It can be beyond frustrating that our intelligent kids seem to have suddenly gone stupid and their “I don’t care” attitudes are just asking for a full on reality check. But one way that is doomed to failure every time and will never ever persuade them to see things our way is lecturing them.

No teen, since the dawn of time, has ever walked away from a parental lecture and suddenly experienced an epiphany about the value of doing chores or getting their homework done. We are not going to talk them into being less self centered or responsible.

At the end of the day, it isn’t about proving that we are right and they are wrong. It’s about asking them the questions that will help them find the answers and solve the problems themselves.

Ask your teens what is really going on with them? Get them to see the root of their anger and to identify the real enemy. It’s generally not you. Then don’t tell them how to fix it or worse yet try to fix it for them. Instead, offer your help and your support, but let them determine what that looks like. A “lecture” is always going to pit us against them, even if we think we is for their own good. But what they really want is for us to be on their side and not to fight their battles for them, but to empower them to fight them on their own knowing we’ve got their back.

6. Don’t Forget To Praise Them

Lastly, in all of this, lets not forget that there is a good kid behind all the disrespect, a kid that we love with our whole heart.

We need to make sure that they know that and that we’re seeing the good and not just the bad. Because praise is truly powerful and they need to hear it from us on the regular.

When our kids show maturity in handling a situation, whether by initiating a respectful conversation or even knowing when they need a few minutes to calm down before talking with us, we should absolutely let them know that we are proud of them.

Our tweens and teens need us now, more than ever, even if they tell us otherwise. So, hang in there through the sighs, and eye rolls and sarcasm.  One day, the thank you will come and it will be worth every battle, both fought and walked away from.

Parenting teens and tweens can be hard, but these popular posts that other parents founds helpful might help to make it a little easier.

How To NOT Raise Entitled Teens