Home / Blog / Are Your Teenagers Procrastinators? 4 Ways To Help. 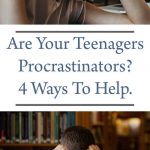 Recently, I was sitting on my couch, computer open and staring at my phone when a text popped up. It was from a teenaged client struggling with anxiety. She wrote something to the effect of “how do I make myself do my homework? I know I need to, but I am just too lazy.”

Part of me wanted to laugh since the reason I was staring at my phone was that I, too, was procrastinating. I wanted to be working on an article I was in the middle of writing, but I couldn’t quite motivate myself to open the document. My phone was much easier.

I don’t think there is a person out there who hasn’t found themselves procrastinating at some point. Some of us more than others. I am a particular fan of what I have termed “productive procrastination.” That is when I do something productive like organizing my linen closet instead of doing the more pressing, time-sensitive task I am avoiding. I rationalize that the productive task needs to be done, but the truth is, that it really doesn’t.

Procrastination is not an easy habit to break, particularly for unmotivated teenagers with no life experience

Calling yourself lazy actually makes it harder to break. The task is made even more difficult when teenagers hear adult voices calling them lazy. In general, insulting ourselves and others reduces motivation rather than increasing it. In the case of procrastination, it is also an inaccurate insult. Procrastination is rarely a problem of laziness. It is actually a difficulty with emotion regulation.

We put things off because it is difficult for us to tolerate a feeling that the activity brings up for us. In my case and my client’s, we were procrastinating in order to avoid the anxiety evoked by what we needed to do.

In my client’s case, she is a high-achieving student who has fallen behind while she struggles with panic attacks. Doing the homework, she is very capable of raises her anxiety in the short-term because she is confronted with the knowledge that she is behind.

My procrastination was fueled by the anxiety I feel when I don’t know exactly what I want to write. I hate staring at a page when I am stuck! It makes me anxious and a bit insecure about the possibility of failure. Writing is fun for me, but uncertainty is not!

Procrastination isn’t a personality flaw or a time-management issue, but a way of coping with challenging emotions and negative moods induced by certain tasks — boredom, anxiety, insecurity, frustration, resentment, self-doubt and beyond. We procrastinate because our short-term need for mood repair outweighs our longer-term need to complete the task. This need is even greater in adolescents whose emotions are less manageable. Many teens are using procrastination as a maladaptive way to ward off some of their unpleasant emotions.

I will openly admit that I have not found a cure for this behavior, as is evidenced by my recent procrastination as well as the difficulty therapists have assisting clients to eliminate the habit. However, I do find a few approaches helpful for myself and I encourage parents to apply them in handling their teens’ procrastination.

4 Ways To Help Your Teenager Who Procrastinates

Our teens will likely continue to procrastinate at times. We will too. Yet everyone will make more progress in breaking the habit if we separate the act from the label of “lazy.”

This is a contributed post by Alisa Crossfield. She is currently enjoying the roller-coaster ride of parenting a teenage son and teenage daughter. She is also a Clinical Psychologist practicing in Westport Connecticut. Her private practice focuses on adolescents and young adults with emotion dysregulation as well as parent consultation. Her professional and personal roles serve to inform each other. She shares these experiences in a personal blog entitled “Psychdiary” and a Psychology Today blog entitled “Emotionally Healthy Teens.“