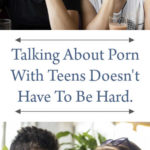 As a teenager in the late 80s, I don’t recall either of my parents ever having to talk to me about the dangers of pornography, and that’s because if I wanted to catch an illicit peak at nude grown adults, my choices were either an issue of National Geographic, or my public library’s copy of “The Joy of Sex,” both seemingly innocuous options. There’s no doubt we’re in an entirely different environment now when it comes to instant and incredibly easy access to nudity and pornography-both soft and hard-core, and if you don’t believe me, here’s a startling fact- the average age a child first sees internet porn is 11. ELEVEN!

2. Who should give the talk? Mom of Dad?

3. Why it’s not a one time conversation

5. Internet filters work, until they don’t

This is a contributed post. Melissa Fenton is a freelance writer, adjunct librarian, and St. Jude Children’s Research Hospital Awareness Ambassador. She writes at 4 Boys Mother. Her writing can be found all over the internet, but her work is mostly on the dinner table.

Parenting teens and tweens can be hard, but these popular posts other parents found helpful might make it a little easier.

Parents: You Need To Talk To Your Teens About Sexting; Now!

Yes! Your Teen Actually Wants To Talk With You About SEX.

How To Build A Strong Relationship with Your Gay Teen