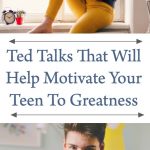 Inside: Motivational TED Talks for teens may be the tool to inspiring your teens to grow, learn, and chase their dreams.

While the teenage years can be a hard time, it’s also a period that allows for a ton of opportunity, lessons, and growth. Teens can be a tough crowd to motivate, however, and it can be tough for them to listen to all the life advice parents want to impart on them.

Sometimes you have to be creative in getting them to stop and hear what you need them to know. And sometimes they just need to hear it from somebody else!

If you are struggling to figure out how to motivate your teen, these TED Talks might just be the magic wand you were hoping to find.

We can all agree on one thing. Being a teenager is hard. From peer pressure to bullying, it always seems like there is something going on that can be downright destructive. And even though teams might seem like they’re overly confident and certain of all the answers, they more than likely need a bit of guidance and motivation as well.

TED Talks are a great way to introduce your child to topics and ideas that they maybe haven’t thought about before. Not only that, but they help your child listen and think about things in a new light, too.

We love them because they are short (normally 18 minutes or less), informative, and focused. They are great to watch while making dinner, waiting around for something, or just for fun.

Here are some great TED talks that will motivate your teens:

How Do You Define Yourself?

Isn’t this a question for us all? This is a great motivational TED talk that you can watch with your teen as well. It brings focus and attention to the fact that we’re not all the same, and that’s okay. The speaker in this Ted Talk actually battles a condition that has completely changed and altered her entire life. And her outlook? Inspiring and motivational, to say the least.

In a time when beauty is defined by supermodels, success is defined by wealth, and fame is deified by how many followers you have on social media, Lizzie Velasquez asks the question how do you define yourself? Once labeled, “The Worlds Ugliest Woman,” by the Internet, Lizzie decided to turn things around and create her own definitions of what she defines as beauty and happiness.

My Philosophy for a Happy Life

This TED Talk is the perfect follow up to the one above. Sam Berns has a rare genetic disease called progeria. This disease creates physical signs and symptoms as if he was aging at rapid speed. So, by age 17 (the age he was during this talk) he looks like an elderly man.

Sam talks about his struggle with his illness and how he tries to focus on the good in life. For him it’s all about the “can do” instead of the “can-nots.” His attitude, considering all he’s had to face, will motivate teens to frame their world differently and no to let trivial things get in the way of their goals.

This is an oldie but a goodie, and one of the most popular TED talks of all time. In the teenage world, labels are everything and everywhere, right? But why is this? Why can’t things just be “different” instead of weird? In this short TED Talk (3 minutes!) by Derek Sivers your teen will learn a little bit about how there are always two different ways in which things are viewed.

What Adults Can Learn From Kids

Sometimes we push our kids to grow up too fast, but sometimes the best motivation for them can be other kids. Child prodigy Adora Svitak says the world needs “childish” thinking: bold ideas, wild creativity and especially optimism. Kids’ big dreams deserve high expectations, she says, starting with grownups’ willingness to learn from children as much as to teach.

Looks Aren’t Everything. Believe Me, I’m a Model.

It’s hard being a teen in the world today. Everywhere they look, it’s all about looks and how they think that they should look like all the perfect models out there posing in the world. The truth? Looks aren’t everything. And it’s honestly what’s on the inside that counts. Model Cameron Russell presents this Ted Talk in an eye-opening and motivational way.

It shows teen girls and boys that they can be anything that they want to be and don’t have to settle for what people initially see on the outside when first seeing them. This Ted Talk motivates well because it’s coming from someone who has found great success but also knows that she’s privileged in receiving it.

Taylor Wilson believes nuclear fusion is a solution to our future energy needs, and that kids can change the world. And he knows something about both of those: When he was in high school at age 14, he built a working fusion reactor in his parents’ garage.

Grit: The Power of Passion and Perseverance

I don’t know any parent that doesn’t want their kid to have grit, so this is an important motivational TED talk for teens. This powerful talk by Angela Lee Duckworth reframes the discussion on resiliency and why it’s important for a young person to develop. Leaving a high-flying job in consulting, Duckworth took a job teaching math to seventh graders in a New York public school. She quickly realized that IQ wasn’t the only thing separating the successful students from those who struggled in the classroom. Here, she explains her theory of “grit” as a predictor of success.

Inside the Mind of a Master Procrastinator

Teenage procrastination is a major issue for so many parents. Tim Urban knows that procrastination doesn’t make sense, but he’s never been able to shake his habit of waiting until the last minute to get things done. In this hilarious and insightful talk, Urban takes us on a journey through YouTube binges, Wikipedia rabbit holes and bouts of staring out the window — and encourages us to think harder about what we’re really procrastinating on, before we run out of time.

What Your Grades Really Mean

Grades can be a source of such anxiety and stress for high school students. Eva Ren a Grade 12 student, has overcome her own academic struggles to become a top student and leader. Her questions and recommendations will ignite discussion between educators and students about the value of grades and the message they send.

This is such a great TED talk for teens. Drew Dudley talks about how we’ve made “leadership” seem something out of reach or only for a certain type of person when in reality, we can change lives every single day. In this funny talk, Dudley calls on all of us to celebrate leadership as the everyday act of improving each other’s lives and empowers us to know that we are providing value often without even knowing it.

In 2011, three young women won all the top prizes at the first Google Science Fair. Lauren Hodge, Shree Bose and Naomi Shah explain the projects that wowed the judges — and talk about what inspired their passion for science.

The Power of Believing that You Can Improve

This talk literally is about internal motivation. Carol Dweck, a pioneering researcher in the field of motivation, why people succeed (or don’t) and how to foster success. discusses “growth mindset” — the idea that we can grow our brain’s capacity to learn and to solve problems. In this talk, she describes two ways to think about a problem that’s slightly too hard for you to solve. Are you not smart enough to solve it … or have you just not solved it yet?

This is a great motivational TED talk on following your dreams. Casey Neistat discusses seizing the opportunities presented to him even when he was a dish washer. He learned that any small task could be looked at asn an opportunity to connect with people whether that was mopping the floor, wiping the toilet, or cleaning a litter box. Casey found consistent work but when an opportunity came up relating to his passion of filmmaking, he took the leap and quit his job to get his foot in the door of the industry. His goal is to inspire people to take advantage of every opportunity even if you don’t think it’s on your path to success.

What Makes a Good Life: Lessons from the Longest Study on Happiness

This is a Mom favorite motivational TED talk for teens. What keeps us happy and healthy as we go through life? If you think it’s fame and money, you’re not alone – but, according to psychiatrist Robert Waldinger, you’re mistaken. As the director of a 75-year-old study on adult development, Waldinger has unprecedented access to data on true happiness and satisfaction. In this talk, he shares three important lessons learned from the study as well as some practical, old-as-the-hills wisdom on how to build a fulfilling, long life.

Pianist and composer Jennifer Lin, Age 14, gives an awe inspiring performance, explains her process of creativity and improvises an emotional solo piece based on a random sequence of notes.

Optical Illusions Show How We See

Tunnel vision can limit us, but Beau Lotto changes that by showing us the possibilities we may not see. This fun, first-hand look at your own versatile sense of sight reveals how evolution tints your perception of what’s really out there.

Science Is for Everyone, Kids Included

A great way to motivate a teen is to show that not everything in life has to be serious and rigid. This is another great motivational talk by neuroscientist Beau Lotto who thinks all people (kids included) should participate in science and, through the process of discovery, change perceptions. He’s seconded by 12-year-old Amy O’Toole, who, along with 25 of her classmates, published the first peer-reviewed article by schoolchildren, about the Blackawton bees project. It starts: “Once upon a time … “

Amy Cuddy’s original TED talk, “Your Body Language Shapes Who You Are” may not be as interesting to teenagers, but this two-minute shortened version can be a great perspective for adolescents who need a little motivation. Body language affects how others see us, but it may also change how we see ourselves. Social psychologist Cuddy argues that “power posing” — standing in a posture of confidence, even when we don’t feel confident — can boost feelings of confidence, and might have an impact on our chances for success.

These motivational Ted Talks for teens are a great way to help your teens overcome their individual obstacles and to follow their dreams.

Don’t let your teen think that they have to conform to what society thinks they should be doing or that they can’t have an original thought or action. These Ted Talks prove that they have the capability to do so much more than most people will ever give them credit for.

Do you have any motivational Ted Talks for teens to suggest?

Previous Post
« How To Help Your Teen Survive All The Drama (And You Too!)
Next Post
The Best 80's Teen Movies Every Parent Should Watch With Their Teens »