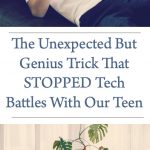 At the beginning of this school year, my husband and I found ourselves arguing yet again with our 13-year-old son about what was a reasonable amount of time to spend on technology.

He was going on and on about how strict we were when it came to technology usage relative to his friends parents and how we only focused on all the bad.

It felt like technology use had morphed into a never-ending negotiation process in our house. There were constant pleas for more time and accusations were always flying. These interactions were starting to really undermine our relationship with our son.

I was so over it and out of frustration I said to him, “Fine, if you think we are so strict and unfair, than you can set your screen-time limits this year!”

Both he and my husband stopped and looked at me like I had two heads. For a minute, even I wasn’t sure where I was going with this, but then it all started to come together.

I told him that before he could have a single hour of tech time for the rest of the school year, he had to present to his father and I what he felt was a reasonable screen time schedule.  But this didn’t mean he could scribble some random number on a piece of paper and hand it to us.

He would be heading to high school next fall and it was time he began to show us that he could make informed choices.

This meant researching the suggested guidelines for teen tech use, the pros and cons, opinions about different kinds of tech use, etc. He had to find out how some of the tech giants of our time like Bill Gates and Steve Jobs handled tech use with their kids. Then, based on all of this, he could decide what he felt was a healthy amount of time per day to spend on tech this summer.   As long as he backed up his final number with sound and balanced evidence we would agree.

I honestly didn’t know exactly where I was going with all this when I started. But I began to realize that as long as my husband and I were the ones setting and enforcing the rules, he really didn’t have any accountability in it all. In his mind it was all totally arbitrary.

But he’s a smart kid and he knows enough to know that endless hours playing Fortnite or Snapchatting with friends aren’t wise choices.  What he didn’t have, and what most teens don’t, is real context and accountability.  We lecture at them about how technology is ruining their childhoods and how they all can’t look people in the eye anymore or carry on a conversation. But all that sounds like to them is the “wah wah wah” voice of that teacher in the Charlie Brown cartoons.

By the time our kids are teenagers, we have to start transitioning from making decisions and setting limits for them, to teaching them how to do this for themselves.   A key part of this is helping them understand the “why.”

It is a process and they’ll need our guidance along the way, but we may be surprised by what good judgment our kids show when we loop them in.

Once my son started looking into everything, he was actually excited to talk to me about what he found out.  He felt a little vindicated discovering that gaming is actually considered far less harmful than online activities like social media (which he has zero interest in).

In the end, what he came up with was not that different that what we already had in place. But he felt more in control and ultimately he enforces the limits more strictly then we ever did, because when time was up the only person to negotiate with was himself.

Dealing with Technology and Teens Can Be Challenging. Here are some other tips you might find helpful:

Teens Have No Safe Spaces Anymore Thanks To Technology

« How To Keep Puberty From Killing Your Tween Girl’s Confidence
How To Help Your Teen Survive All The Drama (And You Too!) »