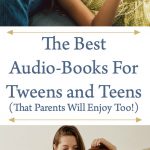 While everyone is stuck at home, reading is a great activity to pass the time. However, not all teeens and tweens are all that into books. But whether you’ve got a book worm or a book avoider, audio books are a great way to provide a little entertainment (and maybe something a little more educational than endless hour playing video games or watching Tik Tok.)

Sure, these would be great if they’d rather just listen on their own, but listening together can also be something to do as a whole family. It’s a great way to connect and maybe help them discover a new way to enjoy books.

If you are looking for some great choices, here are the best audiobooks for teens and tweens that you will enjoy too. You may find that you can actually loan these out from your local library. Or you can grab them from Amazon Audible.

If you are looking for a great adventure book to read with your tween, this is a great option! The Zodiac Legacy follows the story of a boy named Steven and his adventure as he learns to unlock the mysterious powers of the Zodiac.

Matched is another top choice for our suggested high school reading list. This series follows a young girl named Cassia and her difficult decision to choose the path her society has matched her for or a way that no one has dared to follow.

Eleanor and Park is a charming love story that takes place over a regular school year. These two unlikely pair of misfits end up finding love under the most unique set of circumstances.

In a world of humans and androids, The Lunar Chronicles isn’t exactly your typical Cinderella Story. As a deadly plague starts to devastate the population, Cinder must uncover the world’s secrets so she can save New Beijing.

The Caraval series is one you won’t be able to stop listening to! The story tells the tale of two sisters who escape their father and end up entering a dangerous game.

The Last Magician follows a new world filled with magic, but the focus of the story is about a girl who has to travel back in time in order to find a mysterious book that will help save the future!

I Am Number Four

I Am Number Four is a story of alien superheroes that are now running and living in the shadows to stay alive. Although 1-3 have already been caught, this story follows Number Four, and his journey of survival. (This is a series, so there are additional books you can read after this one.)

The Inexplicable Logic of My Life

The Inexplicable Logic of My Life follows the story of Sal and what happens to him as he starts questioning who he is and what his purpose in life is. Sal’s story teaches about belonging and finding ourselves.

The Hunger Games series takes place in the ruins of what used to be the United States. In the first novel, the story follows Katniss, who volunteered in her sister’s place for a mandatory fight to the death game put on by The Capital.

Keeper of the Lost Cities

Keeper of the Lost Cities might be a little more tween than teen, although I read the books, all eight of them, right after my 11 year old daughter and loved them as much as she did. The stories follow the adventures of Sophie Foster, a girl who discovers she isn’t exactly what she seems and who might be the key to not only saving her world, but many others. A tale with filled with magic, mystery, friendships, a little romance and the classic battle between good and evil.

The Alchemyst: The Secrets of the Immortal Nicholas Flamel

The Alchemyst is sure to appeal to Harry Potter fans who will recognize the name of Nicholas Flamel. While there is some magic, the series really falls more into the realm of Rick Riordan favorites like Percy Jackson, with its tales of ancient Gods and there interactions with the human race. Sophie and Josh Newman have just discovered that the kindly couple who runs the bookstore where Josh works have a dangerous secret, and it’s more than a few centuries old. But Josh and Sophie did not end up at the bookstore by accident and it is only the beginning of their story.

These stories are amazing and some of the best audiobooks for teenagers that you’ll find out there. These audiobooks are great books and series that are perfect for listening to together!

Parenting teens and tweens isn’t easy, and getting them to hang out with you can be even harder. But here are some other ideas of things to do together.

The Best Documentaries To Watch With Your Teens and Tweens